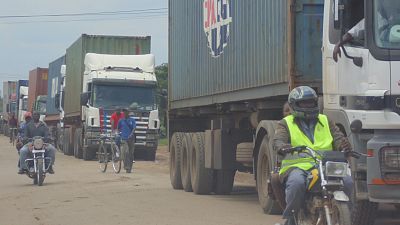 Uganda has stepped up restrictions on trucks passing through its territory – limiting them to one driver and banning them from stopping over in hotels – in a bid to curb the spread of the new coronavirus.

The landlocked country sits on some of east Africa’s busiest road cargo routes that funnel goods from ports in Kenya and Tanzania further inland to Burundi, Rwanda, South Sudan and eastern Democratic Republic of Congo.

Drivers have already been complaining about long queues building up on the Uganda-Kenya border as officials from both countries carry out health checks, according to reports on NTV and other local media

*One driver is enough*

Uganda had registered 79 COVID-19 cases as of Tuesday, at least 16 of them truckers arriving from Kenya and Tanzania, according to health ministry figures.

Infection and fatality figures reported across Africa are still relatively low compared with the United States, parts of Asia and Europe.

But there are fears the infection could spread fast, particularly in areas with poor sanitation facilities, and overwhelm already stretched health services.

Uganda has banned public gatherings, closed schools, barred most vehicles from the roads and ordered all but essential businesses to shut down.

The lockdown, among the toughest imposed in Africa, is currently due to end on May 5. Museveni said on Tuesday restrictions may ease after that.

Museveni also criticised the country’s lawmakers for allocating themselves a one-off payment of 20 million shillings ($5,267.32) each in a supplementary budget meant to fund the fight against the coronavirus.

“It would be morally reprehensible for members of parliament to give themselves money for personal use when the country is in such a crisis,” he said. He ordered them to repay the cash.