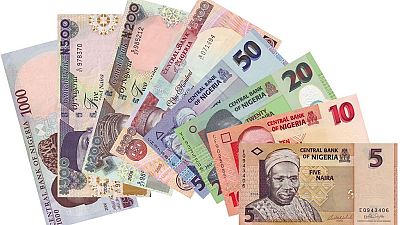 Nigeria’s central bank will migrate to a single exchange rate for the naira by collapsing the multiple exchange rate policy that determined the value for the local currency, people with direct knowledge of the matter said.

The West African nation will merge the official rate, the rate for importers and exporters and rate for foreign-exchange bureaus, among others, according to the people who asked not to be identified because they are not authorized to speak publicly about the matter.

Africa’s largest oil producer has seen its currency come under pressure this year after oil prices slumped to around $30 a barrel, below the government’s $57 target, amid global fight against spread of coronavirus and a price war between Saudi Arabia and Russia. Earnings from sales of crude account for 90% of foreign-exchange earnings and more than half of government income.

It will cushion the impact the lower crude price will have on government revenue as it will increase the naira revenue Nigeria will get from oil exports.

This is a big step forward if it means a convergence of all existing rates as it removes the opaqueness of Nigeria’s foreign exchange policy, Yvonne Mhango, sub-Sahara Africa economist at Renaissance Capital said by email.

The central bank has also allowed the official rate, which was pegged at 307 naira to the dollar to weaken closer to the market rate. Government dollar earnings from oil will now be converted to naira at the higher rate, a huge boost to revenues which has been hit by lower crude prices.

“It will cushion the impact the lower crude price will have on government revenue as it will increase the naira revenue Nigeria will get from oil exports,” Ayodeji Ebo, managing director at Afrinvest Securities in Lagos said by phone.

Nigeria operates a system of multiple exchange rates in a bid to control demand for dollars. The system, which has been criticized by the International Monetary Fund, has kept the official rate at about 307 naira per dollar. It uses this to supply cheap foreign exchange to government departments and select companies, including fuel importers. It created an importers and exporters window in 2017, in which the naira was allowed to weaken after an economic contraction in 2016.

There has long been a consensus among essentially everyone other than the central bank that their multiple rate exchange system was inefficient, unnecessarily complex, and prone to corruption, said John Ashbourne, Africa Economist at Capital Economics by email.

“Hopefully the transition to a more simple, flexible rate is the first step in unpicking the trade-destroying policies that have held back growth in recent years,” Ashbourne said.