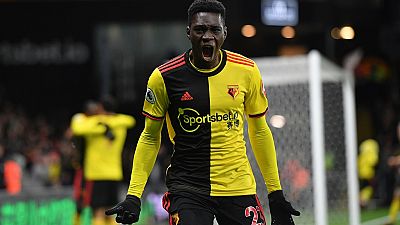 Sarr also contributed the assist for the third goal as the Hornets run riot against the Reds. Before Saturday, Liverpool had gone 44 games unbeaten in the Premier League .

The result means only Arsenal have gone longer at 49 games, a feat they achieved in the 2003-04 season.

Wow! Ismaila Sarr gets his second with a beautiful dink over Alisson#WATLIV

Sarr opened the scoring in in the 54th minute before doubling Watford’s lead six minutes later. Hornets captain Troy Deeney then sealed Liverpool’s fate with a shot from the edge of the box.

The defeat, though resounding, will be a minor headache for Jurgen Klopp’s men. At 79 points, 22 clear of second-placed Manchester City, Liverpool are set to win the Premier League.

Ismaila Sarr is the first player to score a brace against Liverpool in the Premier League this season.

An evening he will never forget. ? pic.twitter.com/V0LyoKl9B0

The win will be a memorable one for 22-year old Sarr. He became the first player to have a hand in at least three goals in a Premier League outing since Tottenham’s Harry Kane three season ago, according to statistics guru OptaJean.

The double took his season’s tally to six. Watford, who are battling relegation play against Crystal Palace next.

Sarr joined Watford from French side Rennes last August for a reported fee of £30 million, a club record.