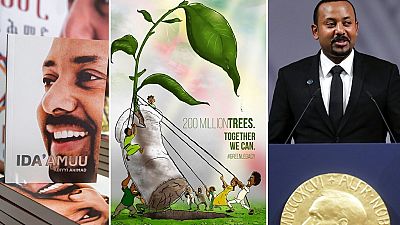 <p>2019 saw Ethiopia under Abiy Ahmed continue to hog the news headlines for good reasons. Back in 2018 when Abiy took over, democratic reforms, peace with Eritrea and gender-par cabinet seemed to have earned Abiy the reformist title.</p> <p>Still in 2018, the first female president, first female Chief Justice and a woman as head of the electoral body were key moves that Abiy put in place.</p> <p>2019 was seen as crucial, it will set the tone for the 2020 election year. What other crucial feats could Abiy orchestrate for a country in transition?</p> <p>Our 2019 review looks specifically at Ethiopia’s big positive news items in what has largely been a challenging year. A second part of this article will delve into gloomy news that hit the country.</p> <h2 style="font-size:16px;"> Abiy becomes 100th Nobel laureate </h2> <p>Starting from the bottom, in December; PM Abiy received the <a href="https://www.africanews.com/2019/12/11/nobel-prize-ethiopia-pm-hails-eritrean-leader-as-partner-comrade-in-peace/">Nobel Peace prize in Oslo</a>. He was awarded the 100th prize for his reforms at home and making peace with Eritrea plus regional diplomacy efforts.</p> <p>Abiy’s reforms have been rapid across different sectors of Ethiopian life, be it the political, economic and media landscapes of Africa’s second most populous nation.</p> <p>African leaders joined Ethiopia to celebrate the feat when the announcement was made in October. Many more praised <a href="https://t.co/Og9IArEJJQ?amp=1">Abiy’s Nobel lecture</a> which touched on Ethiopia and the wider Horn of Africa region.</p> <h2 style="font-size:16px;"> Historic satellite launch </h2> <p>Also in December, Ethiopia joined the <a href="https://www.africanews.com/2019/12/21/via-china-ethiopia-joins-africa-s-satellite-league-who-else-is-in/">list of African countries with satellites in space</a>. The <a href="https://www.africanews.com/2019/12/19/ethiopia-s-historic-space-satellite-et-rss1-all-you-need-to-know/">historic ET-RSS1</a> was shot into space from a Chinese station.</p> <p>The satellite had been built by Ethiopian scientists. Incidentally it was PM Abiy as then Minister who signed the deal for the satellite to be built. The country has an observatory in Addis Ababa where the progress of the satellite is monitored. </p> <p>Data provided by Ethiopia’s satellite is expected to paint a fuller picture of the country’s agriculture, forestry and mining resources and improve responses to flooding and other disasters.</p> <h2 style="font-size:16px;"> Green legacy project, beautifying Sherger project </h2> <p>In May 2019, a fundraising effort aimed at beautifying the Ethiopian capital, Addis Ababa, raked in over $25 million dollars from a section of the project supporters, the PM’s office said.</p> <p><a href="https://www.africanews.com/2019/02/22/addis-ababa-riverside-project-ethiopia-pm-s-futuristic-plans-for-capital/">The Beautifying Sherger Project</a> spearheaded by PM Abiy Ahmed subsequently held a dinner which was dubbed the most expensive in Ethiopian history. Guests paid <a href="https://www.africanews.com/2019/05/21/ethiopians-pay-173000-towards-addis-ababa-beautification-project/">$173,000 (£136,000) to dine</a> at the former emperor Menelik’s palace.</p> <p>The dinner, attracted about 300 business people, diplomats and other representatives. The aim overall aim was to raise a billion dollars for infrastructure projects across Addis Ababa.</p> <p>Then came late May when Abiy launched the <a href="https://www.africanews.com/2019/05/27/ethiopia-pm-launches-4-billion-tree-planting-project-starting-in-oromia/">green legacy project</a> in Oromia Regional State, the main dream being that Ethiopia wanted to plant 4 billion trees to reclaim its depleting vegetative cover.</p> <p>In July, a campaign to plant 200 million young trees in a day kicked off as part of the “green legacy” project. Office of the PM reported that over 100,000,000 young trees had been planted after a six-hour period, which meant Ethiopia had already broken the 66 million record set in India.</p> <p>The final figure of tree seedlings planted according to the Minister of Innovation and Technology came up to exactly 353 million, 633 thousand, 660 in a space of 12-hours.</p> <p>The Minister said this was the verified final figure on the Number of Trees Planted according to the National Steering Committee. The Guinness Book of World Records said it has yet to verify the claim, <a href="https://www.bbc.com/news/world-africa-50813726">the <span class="caps">BBC</span> reported</a>.</p> <h2 style="font-size:16px;"> Abiy’s regional diplomacy </h2> <p>Abiy also engaged in a healthy dose of diplomacy across the region. From <a href="https://www.africanews.com/2019/08/19/how-ethiopia-pm-stole-the-show-at-sudan-transition-event/">Sudan’s post-Bashir mediation</a>, South Sudan to Somali, Kenya and Somaliland.</p> <p>He was in Kenya with Somali president to meet over the <a href="https://www.africanews.com/2019/03/06/ethiopia-diplomacy-pays-off-in-cooling-kenya-somalia-tensions/">Kenya – Somali maritime rift</a>. A widely reported mediation of <a href="https://www.africanews.com/2019/02/21/is-ethiopia-mediating-a-deal-between-somalia-and-somaliland/">Somalia – Somaliland</a> issue ended with a meeting with Somaliland president in Addis Ababa.</p> <p>As then leader of <span class="caps">IGAD</span>, he was key to the signing of revitalized peace deal between South Sudan rivals. Then he stole the show with mediation in post-Bashir Sudan. </p> <p>On Ethio-Eritrea relations, Abiy described what analysts said was a stalled process as “iron-clad” during his Nobel lecture whiles dedicating the award to peoples of both countries. Throw in the revival of naval plans, Abiy listed on <span class="caps">TIME</span>’s Top 100 and as the <a href="https://www.africanews.com/2019/12/25/ethiopia-pm-only-african-on-ft-s-50-people-who-shaped-last-decade/">only African on FT’s persons of the decade</a>.</p> <p>Undoubtedly, a good year for Ethiopia on one hand as crucial elections are planned to hold next year. Abiy has buried the <span class="caps">EPRDF</span> and birthed Prosperity Party going into the 2020 polls.</p> <p>And in the year, published a book <a href="https://ethiopianmonitor.com/2019/10/20/abiys-book-on-medemer-launched/">Medemer</a> one that spells out his political ideals which are centered on “synergy.” Abiy has popularized the word “medemer” since his inaugural address in April 2018.</p> <p>Here is to an even better 2020 for Ethiopia, the wider Horn of Africa region and to Africa as a whole.</p> <p><strong><em>Shaban Abdur Rahman Alfa</em></strong><br /> <strong><em>Digital journalist</em></strong><br /> <strong><em>alfa.shaban@africanews.com</em></strong><br /> <strong><em>@AlfaAfrican</em></strong></p>