Ethiopia PM, only African, on FT's 50 People of the Decade list 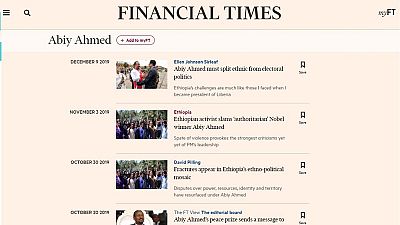 The Financial Times, FT, newspaper has released its list of the top 50 people who shaped the last decade. It had only one African listed in the person of Ethiopian Prime Minister Abiy Ahmed.

A panel of FT reporters finalised the list of individuals across politics, economics, business and technology and culture, media, science and sport.

Abiy has been in the news arena very prominently since April 2018. It took only months for him to be branded a reformist Prime Minister back home in Ethiopia.

Abiy on assumption of office ordered the mass release of dissidents held in the country’s notorious jail facilities. Most of the beneficiaries were political opponents and journalists.

He went on to open the country’s political and democratic space by extending an olive branch to political actors and opening the hitherto restricted media space. A number of websites were unblocked and critical media allowed to operate.

Then across the border his peace offer to Eritrea in July 2018 thrust the Horn of Africa into the media spotlight. Abiy will go ahead to try to build a strong region by attempting mediation in some crises across Ethiopia’s borders.

The deal with Eritrea and reforms at home resulted in him being named the 2019 Nobel Peace Prize laureate – the 100th in the award’s history. In his Nobel lecture, Abiy said he received the award on behalf of the two countries.

The Nobel Committee expressed concerns that the peace process had stalled echoing concerns by some experts in the region. But Abiy said the deal was irreversible referring to it as “iron-clad” and to Eritrean president Isaias Afwerki as a “comrade-in-peace.”

The second decade of the 21st century began with austerity measures to deal with the downturn caused by the global financial crisis and ended with populist governments and illiberal regimes throughout the world.

The FT’s 50 People of the Decade reflects these developments, with game-changing politicians and influential executives from banking and industry. The explosion in and dominance of computers and smartphones in every aspect of our lives is evident in the number of technology figures.

And in a decade where individuals showed themselves to be capable of wrenching power from long-established institutions, those who have made advancements in science, broke new sporting records, protested bravely against persecution and called out institutional harassment could not be overlooked.