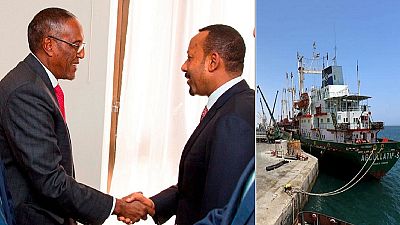 <p><strong>The federal government of Somalia, <span class="caps">FGS</span>, on Wednesday applauded Somaliland’s president Musa Bihi for his cooperation, after years of tension over sovereignty questions.</strong></p> <p>‘‘The <span class="caps">FGS</span> considers this move a progressive step in the right direction and applauds President Bihi’s commitment in this regard,’‘ read part of a tweet posted on the official Somali presidency account.</p> <p>The tweet followed a meeting between Bihi and Ethiopia’s prime minister Abiy Ahmed in Addis Ababa.</p> <p>Media reports had indicated that Somalia’s president Mohamed Farmaajo would join the two leaders, but this was not to be.</p> <p>Instead both Abiy and Bihi discussed regional peace and integration, in addition to bilateral ties.</p> <p>‘‘We discussed ways to strengthen the bilateral relationship and trade collaboration of the two countries,’‘ Bihi said in a tweet after the meeting.</p> <p>FanaBC, which is affiliated to the Ethiopian government reported that Bihi had acknowledged Abiy’s efforts to consolidate regional integration and accepted the premier’s call to further strengthen the close working relationship between the Somaliland Administration and Federal Government of Somalia.</p> <h2 style="font-size:16px;">Somalia, Somaliland conflict</h2> <p>Somaliland declared unilateral independence from Somalia on May 18, 1991, but despite having its own currency, parliament, military and legal system, it is still under pressure to hold talks with Somalia.</p> <p>It is regarded by the international community as an autonomous region of Somalia and not a sovereign state.</p> <p>Last year, Somalia and Somaliland engaged in a war of words following the signing of an agreement to manage the latter’s Berbera port.</p> <p>Under the tripartite agreement signed in March, Ethiopia acquired a 19% stake in the port, joining Somaliland and DP World of the United Arab Emirates (<span class="caps">UAE</span>) under a 30 year concession.</p> <p>Somalia declared the agreement ‘null and void’ saying Somaliland had no authority to enter into international agreements, to which Somaliland responded by saying <span class="caps">FGS</span> had ‘declared war’.</p> <a style="font-size:16px; font-color:yellow;" href="http://www.africanews.com/2018/06/21/somalia-s-ports-deal-with-ethiopia-does-not-affect-somaliland-foreign-minister/"target="_blank"><span class="caps">READ</span> <span class="caps">MORE</span>: Somalia’s ports deal with Ethiopia does not affect Somaliland</a>