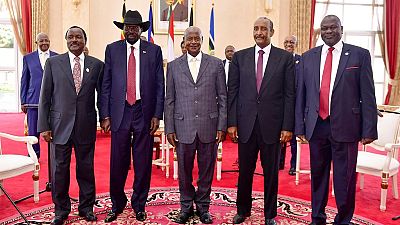 South Sudan’s president and a former rebel leader agreed on Thursday to delay the formation of a unity government for 100 days beyond the Nov. 12 deadline, according to a statement from Uganda’s presidency.

The statement was released after President Salva Kiir and opposition leader Riek Machar met in Uganda in a last-ditch effort to resolve outstanding disputes preventing the formation of a coalition government by the deadline.

“The summit made several resolutions among which is extending the pre-transitional period for 100 days, with progress reviewed after 50 days. A mechanism will also be established for Guarantors and Parties to supervise implementation of talks.

“We resolved to ask IGAD countries to address the status of Dr Riek Machar and also urge the international community to continue supporting this revitalised peace process,” the statement by host of the summit Yoweri Museveni read.

The formation of a unity government meant to end deadly incidents in the country was planned for next week but the main opposition expressed grave reservations weeks back.

The Kampala meeting was the third between Kiir and Machar since the latter returned to the country this year under an IGAD brokered peace deal.

Today at State House Entebbe, I chaired the Tripartite Summit on the Revitalised Agreement seeking to resolve the South Sudan conflict. I thank Their Excellencies Salva Kiir and Riek Machar for coming and holding candid discussions. pic.twitter.com/n3OEHMoP8S