Here's why Bill Gates and Nigeria's Dangote have a 'fruitful partnership' 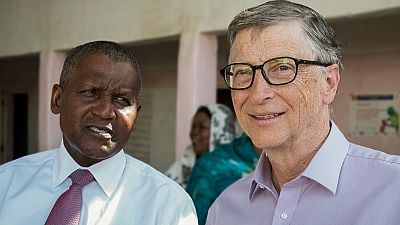 Gates, whose Bill and Melinda Gates foundation, works to reduce inequalities in health, said he and Dangote have a lot in common.

‘‘We both started successful businesses in the late 1970s. For our second act in life, we both chose to start foundations aimed at improving health and education,’‘ Gates said in a blog post titled ‘A fruitful partnership’.

Melinda and I are lucky to have him as a partner and friend in improving health!

‘‘More importantly, we both love to geek out over things that make some people’s eyes glaze over, like cement, fertilizer, and iodized salt.’‘

In 2016, the Dangote Foundation and Gates Foundation entered into a partnership worth $100 million to reduce malnutrition in Nigeria.

‘‘One of the greatest factors that undermine progress is malnutrition. A lot of kids don’t have access to sufficient and nutritious food,’‘ Dangote said at this year’s Goalkeepers event.

‘‘One of the ways our foundations are working together to fight malnutrition is through food fortification…by adding micronutrients to the food that families, especially those from low-income households, are purchasing every day,’‘ Gates explained.

Malnutrition is responsible for nearly half of all deaths in children under 5, and both entrepreneurs believe that tackling it in Nigeria could unlock progress for the entire continent.

‘‘Aliko Dangote understands this, and that’s why he’s committed to making progress in his home country. Melinda and I are lucky to have him as a partner (and friend!) in improving health,’‘ Gates said of Dangote’s commitment.

Asked what they had learnt about each other in the years of their friendship at the Goalkeepers event, Africa’s richest man described Gates as a ‘very simple, soft-spoken and kind-hearted person’.

‘‘Meeting Bill made me a totally different person. To think that here is someone who has nothing to do with us in Nigeria or the African continent, and yet he is putting his money, his soul, everything…he is very, very committed to helping humanity,’‘ Dangote said.

Dangote added that he had been inspired by Gates to give away significant portions of his wealth to charity.

‘‘Aliko really knows people. He has relationships, he is willing to reach out to people. His ability to reach out, and the communication skills that Aliko has developed, have really been phenomenal,’‘ Gates said of his friend and partner.