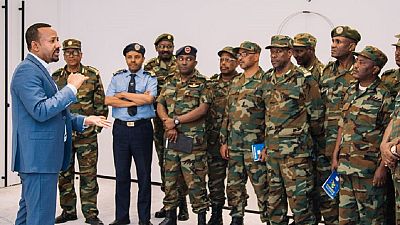 Ethiopian officials have confirmed that Islamist militant members of the Somali group al Shabaab and Islamic State were planning to carry out attacks in the country on various targets including hotels.

The National Intelligence Security Services (NISS) issued a statement on Saturday saying it had arrested an unspecified number of militants, some of whom were carrying out intelligence work including photographing potential targets.

“The group was … preparing to attack hotels, religious festivities gathering places and public areas in Addis Ababa,” NISS said in the statement read out on state-affiliated broadcaster Fana.

Those detained, NISS said, were arrested in the capital Addis Ababa, Oromia and Ethiopia’s Somali region.

An Ethiopian army official says members of the Islamic State extremist group have been detained in the East African country.

Berhanu Jula, deputy chief of Ethiopia’s military, told the state-owned Ethiopian News Agency on Wednesday that there is evidence the extremist group “has recruited, trained and armed some Ethiopians.”

He did not say how many were arrested and how.

He said other members of the group still at large are being hunted down and warned that the Islamic State group had tried many times in the past to set up base in Ethiopia.

Prime Minister Abiy Ahmed has recently warned about attempts by the Somalia-based al-Shabab extremists to make inroads into Ethiopia.

Al Shabaab has been fighting for years to topple Somalia’s central government, which the African Union-mandated peacekeeping force AMISOM helps to defend.

The militants have carried out numerous attacks in Somalia on military and civilian targets, and it has also conducted attacks abroad including in Kenya.