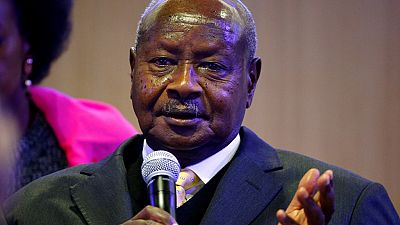 Ugandan President Yoweri Museveni has bashed the United States’ sanctions against former Inspector General of Police, Kale Kayihura. The President commented that visiting the USA is not as important as the opposition politicians in the country make it to be.

For the Opposition that is celebrating US sanctions against General Kale Kayihura, it simply shows how poor the quality of their spectacles are, when it comes to issues of Uganda and Africa. Full article here: https://t.co/XVwz7tc9DT

In a statement released by the President, he says “Africa needs those parts of the World and they need Africa”.

The U.S. Treasury has frozen all assets in the United States owned by the former inspector general of Ugandan police, Kale Kayihura, accusing him of engaging in serious human rights abuses in the East African nation.

Kayihura, who served in that post from 2005 to March 2018 when he was sacked by President Yoweri Museveni, has also been banned from traveling to the United States. Uganda is one of the key allies of the United States in the region.

“The U.S. government is committed to leveraging our human rights and corruption authorities to target, disrupt, and counter those who engage in abuse and corruption around the world,” Sigal Mandelker, Treasury Under Secretary for terrorism and financial intelligence said.