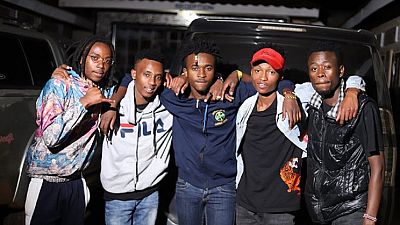 Two highly popular Kenyan songs have been banned by the country’s arts watchdog, the Kenya Film and Classification Board, KFCB.

Head of the KFCB, Ezekiel Mutua, on Tuesday disclosed that his outfit considered Tetema (a Tanzanian song) and Wamlambeez (by Kenyan music group, Sailors) obscene and had banned it from being played publicly.

He added that they could only be played in clubs and pubs for consumption of adults especially because they were sang in coded language. Reports indicate that the songs makeveiled reference to oral sex in parts of it.

“Tetema and Wamlambez songs are strictly forbidden outside of clubs and bars. It’s embarrassing to see even national leaders singing and dancing to the obscenity in public. The lyrics are dirty and not suitable for public consumption, especially children.

“Both songs are pure pornography. While we may not ban them because they are coded, it’s important for the public to know that they are dirty and unsuitable for mixed company. Let them be restricted to clubs, for adults only!” he tweeted.

With the current ban which has been widely criticised, the songs cannot be played on television, radio and on public buses.

The wamlambez track was released in April 2019. It is sang in a popular local slang known as Sheng. Its video has grossed over four million views on YouTube. It also features dance moves considered lewd.

Its popularity before the ban cut across the social strata. Whiles it has widely been sang at football games, political rallies have also had their fair share of using it.