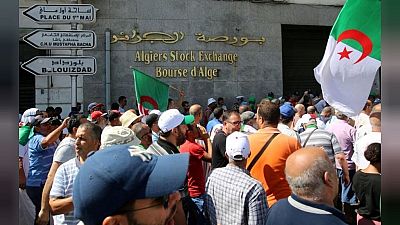 On the face of it, Algeria’s state-dominated economy has weathered six months of turmoil well, with flightloads of public sector workers heading abroad for holidays even as protesters who ousted the veteran president in April now target his allies.

But business, and leisure, as usual for the North African country’s army of state employees masks a growing economic drama behind the standoff between political, business, labour and military elites and those determined to force them out.

The country’s rich oil and gas resources are still flowing, but thousands of jobs are on the line and growth is stuttering in an economy where official data shows one in four of the under-30s, who form 70 percent of the population, is unemployed.

No one can now imagine the magnitude of the economic problem.

The resignation of Abdelaziz Bouteflika in April was followed by the appointment of an interim president overseen by the military, and corruption investigations have been opened into some of those around the former leader.

Putting tycoons close to Bouteflika behind bars was a key demand of the protests. But while investigations drag on, five big firms across sectors from sugar to cars are almost paralysed as their owners struggle to sign pay checks or orders to import materials because their bank accounts have been frozen.

Malik, one of 15,000 employees of detained businessman Ali Haddad, said he had just been sacked as a reporter for Dzayer TV. “The managers told me there is no more money,” he said, withholding his second name for fear of repercussions.

Haddad denies wrongdoing and the interim government says it will find ways to safeguard jobs, but after three months without pay, hundreds of his workers have joined tens of thousands of demonstrators who gather weekly in the capital Algiers.

Elections for a successor for Bouteflika have been postponed indefinitely, despite a dialogue between opposition parties and the non-party government managed by army chief Lieutenant General Ahmed Gaed Salah.

To limit further dissent, the interim government has held back planned reforms, initiated towards the end of Bouteflika’s 20-year rule, to wind down subsidies, open the economy to investment and create jobs outside bloated public services.

An energy law to cut red tape is on hold and inside Algeria’s sprawling state energy company Sonatrach, which is hoping to boost production by linking up with oil majors, there is growing concern.

“Output is ongoing at Sonatrach, but everything else is completely frozen including talks with Exxon and Chevron,” a Sonatrach source told Reuters, declining to be named due to the delicate political situation. Exxon declined to comment and Chevron was not immediately available.

Any deal with a foreign firm is sensitive in Algeria and needs the support of a permanent president, not a caretaker: the source said it was not clear when the talks may restart.

“No visibility for the short term as politics not economics is at the top of the agenda for now,” the source said. The company spokesman was not immediately available for comment.

The country is a key gas supplier and security partner to Europe in a volatile region: Islamist militants are on the rise in West Africa and to the east, in Libya, two rival governments are fighting for control.

The government has given no growth forecast for this year, but Algiers University economics professor Abderrahmane Aya said the turmoil will cost this year’s GDP one percentage point of growth, which reached 2.3% in 2018, and could get much worse.

“No one can now imagine the magnitude of the economic problem,” he said.

Oil and gas provide 94% of export earnings and 60% of the budget, but earnings fell 6.3% to $17.65 billion in Jan-June with rising energy consumption eating into gas exports.

Imports, averaging $50 billion a year, provide most of Algeria’s needs, legacy of a reluctance to allow foreign investment due to its 1954-62 independence war with France and once strong ties with the Soviet Union.

The trade deficit rose 12% in the first half of this year, customs data showed.

“Everything seems to indicate that we are going through a long period of economic uncertainty,” Abdelhak Lamiri, a former government economic adviser, wrote in the El Watan newspaper. “The government is not empowered to take strategic decisions.”

Houari Tigharsi, an economist and member of parliament’s finance committee, said investors were apprehensive and non-energy domestic production capacity was down 50 percent.

“If the crisis drags on, we will not only see a fall in growth but the economy will even face disaster,” he said.

Interim President Abdelkader Bensalah has resisted calls to quit from protesters who see him as symbol of the old regime. He says the only way out of the crisis is to hold elections “as soon as possible”.

Algeria had vowed to develop the car industry, but reduced quotas of car spare parts imports for private vehicle assemblies after the bill rose by a fifth to $1.234 billion in the first four months of this year. Importers get money in foreign currencies from state banks.

Industry Minister Djamila Tamazirt told reporters the quota reductions were “transitional measures to adjust the balance of payments” and correct incentives aimed at the automotive sector.

Four private companies assembling cars are now cutting production, despite growing demand from the country’s 43 million people which may drive up prices of second-hand cars.

Family-owned firm Sovac, which runs an assembly plant with Germany’s Volkswagen, has suspended orders for this year. Sovac head Mourad Eulmi is being investigated for graft, which he denies.

Around 800 workers assembling vehicles under the Hyundai brand were given forced leave by their employer Tahkout Manufacturing in July due to lack of raw materials, according to state media.

While sectors like food, home appliances and mobile phones have been opened up to private companies, the non-energy sector grew by just 4% last year, up from 2.2% the year before.

“We will need bank financing to expand our investment,” said Ziad Loucif, communication manager at Cuisinox, a private firm focused on kitchen equipment manufacturing, mainly for hotels. “We want the state to facilitate investment.”

Work on a 185-km (115-mile) railway line has stopped and some 200 employees were put on forced leave for a “lack of liquidity”. The project belonged to detained Bouteflika ally Haddad.

“The government is working to find legal solutions for these companies,” Finance Minister Mohamed Loukal told state news agency APS. “I can assure you that production tools and jobs at these companies will be safeguarded.”