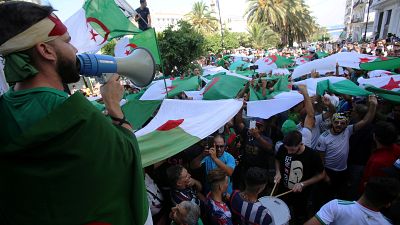 Thousands of Algerian protesters took to the streets of the capital Algiers for a 25th consecutive Friday, calling for “civil disobedience” against the ruling class amid an ongoing political crisis in the country.

The movement which began on February 16 after ageing President Abdelaziz Bouteflika’s decision to seek a fifth term, led to his resignation on April 2 following pressure from the country’s army.

Although their demonstrations have also led to the detention of some of the country’s officials, protesters are demanding a complete overhaul of the system which comprises army generals, business gurus and politicians, beginning with interim president, Abdelkadr Bensalah and Army chief, Ahmed Gaid Salah.

Our joy will be greater once we have elected a president through the ballot box, and this will only be possible if honesty, sincerity and good intentions are on the negotiations table.

Fethi Gherras, Democratic and Social Movement (MDS) party coordinator stated that, “ we will enter into a dialogue with the revolution and the people’s demands only, which means that they all need to leave, that they must all be judged, it will be up to us to debate with each other. Long live Algeria!”

44-year-old protester, Samir, is asking for the release of all detained demonstrators as a condition to resume dialogue between protester leaders and the ruling army generals.

“Our joy will be greater once we have elected a president through the ballot box, and this will only be possible if honesty, sincerity and good intentions are on the negotiations table.”

All efforts to hold elections to find a replacement for overthrown president Bouteflika have stalled.

Leaders of the weekly protests maintain that any poll before the complete overhaul of the political system will smuggle the Bouteflika regime back to the country’s headship.