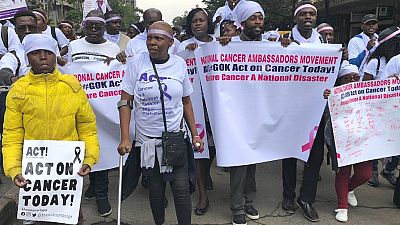 Kenyans have taken to the streets to put pressure on the government to declare cancer a national disaster.

The protest spear headed by the civil society believes more efforts would be put in research and treating the disease among other initiatives if the country saw it as a national disaster. This comes after two prominent Kenyan politicians died of cancer and the managing director to the leading telecommunications company, Safaricom, died after publicly fighting the disease.

The protests come after three prominent Kenyans who died of cancer.

However, Kenya’s Ministry of Health cabinet secretary, Sicily Kariuki, has said that the East African nation has decentralized chemotherapy treatment centers and is developing the capacity of oncologists; 20 doctors are being trained now and 35 are already deployed across the country.

The Minister asked the government to make cancer awareness an immediate priority during the launch of the Board of Trustees for the National Cancer Institute of Kenya.

The human resource capacity to manage cancer has also grown with a progressive increase in the number of oncologists (currently at 35) with an additional 20 in training. Local training programs have been established in collaboration with local teaching institutions. pic.twitter.com/0LMeUcpzI6

Cancer is the third leading causing of death in Kenya says the Ministry of Health. Although there is more attention being paid to cancer due to the death of prominent people, the treatment has improved significantly. According to the government close to 50,000 cases are detected annually of which 33,000 die.

Kenya's capacity to detect cancer has significantly improved. As estimated 47,887 new cases of cancer are detected, 3,200 among children below 18 and 32,987 people die annually. The 5 most common cancers are Breast, Cervical, Oesophageal, Prostate and Colorectal cancer. pic.twitter.com/yaPRX63Y1A