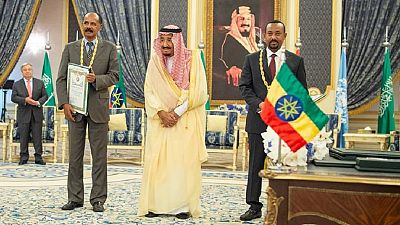 Two decades of hostilities ended in July 2018 when Ethiopia and Eritrea agreed to end a military and diplomatic standoff sparked by a border war.

A lot of commendation trailed the decision of Ethiopian Prime Minister Abiy Ahmed to accept a border ruling and his offer of peace to Eritrea. His historic flight to Asmara set off what became one of the defining news moments of 2018.

Since the first agreement, which received wide regional and international praise, both leaders have exchanged visits and have also met outside of the continent.

They have both been honoured by major players in the Gulf Region who continue to exert diplomatic, economic and security influence on countries in the Horn of Africa region.

The first deal, Joint Declaration of Peace and Friendship, as earlier stated was signed in Asmara on the final day of Abiy’s two-day official visit. The summaries read as follows:

The “State of war that existed between the two countries has come to an end,” Eritrea’s information minister, Yemane Gebremeskel, wrote on Twitter at the time.

Then later in the year, there came the “Jeddah meeting”: at which both leaders signed a declaration which was witnessed by Saudi’s King Salman ibn Abdul Aziz and the United Nations Secretary-General, Antonio Guterres.

FULL TEXT OF THE JEDDAH DECLARATION

The gold honours from the Gulf

On the respective trips of Afwerki to Addis Ababa and Abiy to Asmara, the embrace, smiles, camaraderie and hearty exchanges could not be missed and even beyond the two key personalities trickling down to members of their delegations.

One of the first overseas destinations of Abiy after taking office was to Saudi Arabia and then to the United Arab Emirates. The Crown Prince of the UAE also visited Ethiopia early on in Abiy’s tenure.

Months after the Asmara deal, reports emerged that Abiy was visiting the UAE, it turned out that Afwerki was also billed to be in the country at the same time.

Later at a ceremony led by Crown Prince Mohamed Bin Zayed, Abiy and Afwerki were awarded gold medals, the topmost award (Order of Zayed) of the Emirates for their respective roles in agreeing to restore peace.

Weeks on, Saudi Arabia also conferred same, gold medals which formed part of its highest national honours on the two leaders before the Jeddah declaration alluded to above was also signed by the two along with King Salman and the UN chief.

Tale of two regions: The Gulf and the Horn

The Horn of Africa has long been dubbed one of Africa’s most influential and yet volatile politico-security region. Experts have stressed that its position has made it a hotspot especially for major players in the wider Gulf region.

Saudi and the UAE continue to combat Qatari, Turkish influence in the region especially in Somalia and Djibouti. Whiles Addis Ababa has largely remained non-aligned, Eritrea has openly criticised Turkey and Qatar for their overtures.

Analysts had repeatedly linked the peace deal partly to United States diplomacy and to the instrumentality of Gulf powers especially the United Arab Emirates and Saudi.

With the medals, deals and hype now over a year old, analysts say the vibe and buzz around the deal has faded despite the two countries increasingly stressing that work was still being done to ensure a progressive implementation of the deal.