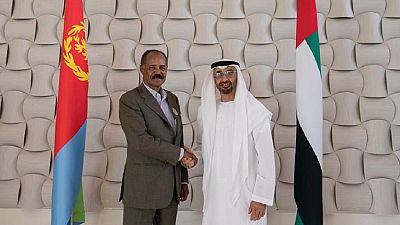 The United Arab Emirates, UAE, and Saudi Arabia have continually been cited as interested parties in the Horn of Africa region especially so given their role – direct or indirect – in the July 8 peace deal between Eritrea and Ethiopia.

Before the open diplomacy and rewarming of ties as has been seen in the recent months, Gulf countries maintained close dealings with among others, Eritrea, Ethiopia, Somalia and Djibouti.

So it was in 2017 during the height of the Gulf Cooperation Council (GCC) vs. Qatar standoff, Eritrea and Djibouti took firms stands with the GCC whiles Ethiopia and Somalia opted to stay on the fence and advocate for mediation.

Eritrean leader Isaias Afwerki is one who has in a space of about a year visited the UAE on multiple occasions. The most recent being January 6, 2019 – his first UAE trip this year.

“Mohamed bin Zayed receives the President of Eritrea, discusses ways of enhancing friendship and cooperation as well as a number of issues of mutual interest,” the UAE Crown Prince wrote on Twitter, Eritea’s information minister corroborated the trip.

Mohamed bin Zayed receives the President of Eritrea, discusses ways of enhancing friendship and cooperation as well as a number of issues of mutual interest. pic.twitter.com/fQ2Nn5BVsm

Here’s a timeline of Afwerki’s Abu Dhabi visits in the last few months:

Days before the historic peace deal was signed between Afwerki and Ethiopia Prime Minister Abiy Ahmed Ali in Asmara, Afwerki travelled to the UAE.

When Afwerki next returned to Abu Dhabi he was awarded a peace medal along with the Ethiopia PM.

According to Crown Prince Mohamed Bin Zayed, the Order of Zayed – UAE’s highest award, was conferred on both leaders “in recognition of their work for peace between the two nations.”

President Afwerki in September 2018 returned to the United Arab Emirates for what was a three-day official visit.

Roll on, December 2018 and Isaias Afwerki again held talks in Abdu Dhabi on bilateral ties of cooperation and matters of mutual interest.

The Prince posted a photo on Twitter where he is seen with the Eritrean leader along with other Emirati officials. “Mohamed bin Zayed receives the President of Eritrea to discuss cooperation and friendship as well as issues of mutual interest,” he wrote.