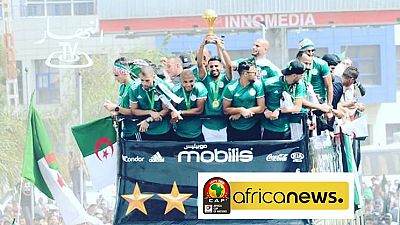 The 32nd edition of the African Cup of Nations, AFCON 2019, ended in Egypt on Friday July 19 when the Fennecs of Algeria beat the Teranga Lions of Senegal by a lone goal scored in the second minute of the game.

The Algerians by this victory have won the tournament twice. First in 1990 when they hosted it. They join the teams to have won it twice in their history – the others being the Democratic Republic of congo, DRC, and Ivory Coast.

The Senegal side on the other hand have to wait longer for a maiden victory at the tournament. The current loss is their second final flop. The first in 2002 was in Mali after they were beaten via penalties by Cameroon.

As is traditional, the winners got to celebrate on the field whiles nationals at home and abroad also celebrated the victory. The team managed by Djamel Belmadi had a triumphant return when they returned to the capital Algiers after the feat.

The streets of Algiers had till now been in the new for dogged anti-government protests that were calling for the dismantling of the political system built and sustained by the two decades rule of resigned president Abdul Aziz Bouteflika.

The AFCON reports indicated gave a strong sense of national unity in the wake of political events back home. Interim President AbdulKader BenSaleh was in Cairo for the final game along with plane loads of supporters.

So for all it is worth, the Algerian team led by skipper Riyad Mahrez did deserve the huge crowd that welcomed them for their hard work and continental conquest.

The Senegal side that came in second after a steady steely run to the final also went home to a sizeable crowd that praised their efforts despite the heartbreak of losing a second final.

They were received by the president Macky Sall at the Presidential Palace where they were congratulated for their efforts in Egypt.

In the case of Madagascar, they were enjoying double celebration despite falling at the quarter-final stage to Tunisia. The Barea had won the hearts of fans back home and across the world for their displays.

President Andriy Rajoelina flew with supporters to Cairo after they finished top of Group B beating Nigeria in their final game. After beating DRC in the round-of-16, the president predicted that the team could go as far as the final.

That was not to be as Tunisia had other plans but the team exited the tournament with their heads high and got a big welcome on their return to Antananarivo. Icing on the cake, the players were knighted by the president.

The South Africa, Benin and Ugandan teams were also praised for their outing at the tournament. South Africa for eliminating hosts Egypt in the round-of-16 and enduring a painful exit at the hands of Nigeria.

The Benin team also dismissed pre-tournament favourites Morocco at the round-of-16 stage in one of the biggest upsets beside Madagascar upstaging Nigeria and South Africa breaking Egyptian hearts.

They got a good reception back home where hundreds came out to meet them. They were also dinner guests of the president. Over in Uganda, the president promised a financial package for the team after their return from Egypt.

The Squirrels team was given a rapturous welcome yesterday. They met the President for dinner, before being driven to the packe Mathieu Kerekou stadium.

Cameroon had a different reason to something related to the AFCON despite losing their title defense at the round-of-16 stage to Nigeria.

The center referee in the final and his assistants were warmly received according to reports at the main airport in Yaounde by the football association president and other government officials.

#Cameroon’s Alioum Sidi, central referee of the #AFCON2019final in #Cairo, gets a warm welcome, on the streets of Yaoundé. He and his assistants were equally received at the Nsimalem International Airport, by the FECAFOOT president, Mbombo Njoya and some government officials. pic.twitter.com/LOvvD5M4BC