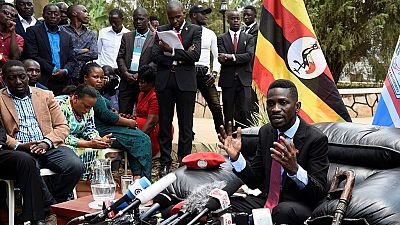 Ugandan pop star and opposition figure Bobi Wine said Monday he will challenge longtime President Yoweri Museveni in a 2021 election “on behalf of the people.”

But Wine, whose real name is Kyagulanyi Ssentamu, said he is concerned about his safety after what he believes was an attempt on his life last August. His driver was shot dead in his car after protesters threw stones at the president’s motorcade.

Wine’s arrest at the time sparked protests in Uganda’s capital, Kampala. The 37-year-old said he is fearful of harm from running for president because “there has never been a threat to this regime like the threat we pose to it today as a generation.”

“I live every day as it comes, not being sure of the next day,” Wine said in an interview with The Associated Press. “I am not blind to the fact that the regime wants me dead and wants me dead as soon as possible.”

Authorities have repeatedly denied Wine is being targeted.

As the leader of a popular movement known as “People Power,” Wine has captured the imagination of many who want to see the exit of Museveni, a U.S. ally on regional security who has held power since 1986 and looks set to seek a sixth term.

Wine said his aim ahead of the election is “to multiply myself in various young men and women, so that there are as many Bobi Wines as possible.”

Uganda has never witnessed a peaceful transfer of power since the East African country gained independence from Britain in 1962.

“Power has been taken away from the people by those that wield guns, and that’s what we want to put an end to through the vote,” he said.

Wine first came to national prominence in 2017 when, as an independent candidate, he won election as a lawmaker representing a constituency near Kampala. He has since successfully campaigned for other opposition candidates, raising his profile as a leader and attracting encouragement to run for president.

Wine is “a symbol,” a potential catalyst for change in a country where many young people are jobless and angry over official corruption, said Mwambutsya Ndebesa, history lecturer at Uganda’s Makerere University. “He can still be symbolically a game changer in a system where the political space has been narrowed.”

Wine also faces treason charges stemming from his alleged role in the incident in which the president’s convoy was attacked with stones. Prosecutors added additional charges of annoying the president over that incident. He also is charged with the offense of disobeying statutory authority after he led a demonstration against a new tax targeting social media. He denies all the charges.

Wine would be ineligible to run for president if he were to be convicted of any of those crimes.

“We know that the regime is going to try anything within their reach to block us from contesting,” Wine said.

Museveni, who is 74 and remains popular among some Ugandans, is expected to run again after parliament passed legislation removing a clause in the constitution that prevented anyone over 75 from holding the presidency.

As the bill was being debated, security personnel during one chaotic session entered the parliamentary chamber and roughed up opposition lawmakers, including Wine, who had been trying to delay a procedural vote.

The president accuses Wine and other opposition figures of trying to lure young people into deadly rioting.

Museveni’s party, which dominates the national assembly, has endorsed him as its sole candidate for the next election. The opposition is divided, with veteran opposition figures frequently attacking each other in public.

Although Wine’s rise as a possible presidential contender has energized the opposition, it also has exposed rifts among the opposition figures who hope to take power after Museveni.

As Wine’s stature rose, tensions grew between him and Kizza Besigye, a four-time presidential candidate who has been Museveni’s most serious election opponent. Besigye was criticized by Wine’s supporters after he suggested that the singer was not yet ready to become president, underscoring how difficult it will be for the opposition to unite against Museveni.