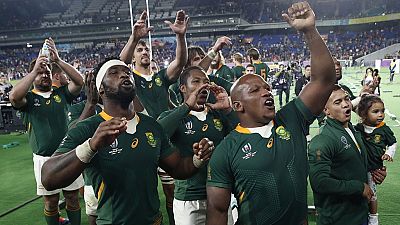 South Africa were powered to a nine-wicket victory over Sri Lanka on Friday, dealing a huge blow to the Asian side’s hopes of reaching the World Cup semi-finals.

Hashim Amla (80) and captain Faf Du Plessis (96) put on an unbeaten 175 for the second wicket as South Africa cruised to victory in the 38th over, finishing on 206 for one.

“It feels like it’s a long time coming,” said Du Plessis, whose side were already out of contention for the semi-finals before the match.

So South Africa almost need to win every game they will play.

“It feels bittersweet, it doesn’t feel like it means too much,” he added. “But the basics of batting were shown today. We’ve not had guys bat long and build big partnerships. One big partnership and everything looks much easier.”

Sri Lanka’s batting let them down against an inspired South African pace attack led by recalled seamer Dwaine Pretorius, who returned figures of 3-25 from his 10 overs.

Playing for pride, South Africa rarely put a foot wrong after electing to field first in Chester-le-Street, bowling out Sri Lanka for 203 in the 50th over.

South Africa will sign off with a final league match against Australia, while Sri Lanka have two more games, against West Indies on July 1 and India on July 6.

South Africa was effectively eliminated from the World Cup after their loss to Pakistan on Sunday.

The Proteas’ chances of progressing in the tournament evaporated after they logged their fifth loss in seven matches, making it mathematically impossible for them to secure a top-four spot and a place in the semi-finals.

“It’s becoming where it’s a little bit embarrassing. We’re trying, but it’s just not good enough. Obviously I’m human as well so it will keep chipping away at me,” captain Faf du Plessis told reporters after a 49-run defeat at Lord’s.

The team’s headline bowler, paceman Kagiso Rabada, said the whole team felt like they had failed to play to their usual standard, both on Sunday and throughout the tournament.

“Pakistan turned up, and we didn’t,” he said.

“We’re very disappointed. We tried so hard at practices and we spoke about what we needed to do, but unfortunately we just couldn’t bring it out into the field of play. And that’s what you have to do in tournaments like this.

South Africa will now go through the formality of playing Sri Lanka and holders Australia in their last two matches of a forgettable World Cup.

Chasing 242 to win a match reduced to 49 overs a side by rain, New Zealand looked set to comfortably reach the target with Martin Guptill and Williamson at the crease.

But Guptill, on 35, was dismissed hit-wicket trying to pull Andile Phehlukwayo to the boundary and Chris Morris bowled a fiery spell to get rid of Ross Taylor and Tom Latham, both caught behind for one run.

South Africa had a golden opportunity to run Williamson out after a mix-up with De Grandhomme left the Kiwi skipper well short of his ground but David Miller fluffed the chance, whipping the bails off without collecting the ball.

De Grandhomme fell before the end but Williamson reached his century with a six in the final over and guided New Zealand to their fourth win of the tournament with three balls to spare.

“It was nice to be there at the end,” said Williamson who finished unbeaten on 106. “It’s just trying to do the job as well as you can, I was fortunate I was able to do it today. There were a number of contributions that were so vital.

“It was one of those surfaces that provides a great spectacle. It could have gone either way.”

South Africa’s batsmen apart from Hashim Amla and Rassie van der Dussen failed to build on starts after being put into bat in the face of a disciplined bowling effort from the Kiwis.

Amla was bowled for 55 by Mitchell Santner but Van der Dussen’s unbeaten 67 off 64 balls gave the South Africans a respectable total to defend.

“We were aiming 260-270… we fell short,” South Africa captain Faf du Plessis said. “We also had a lot of stop-start, stop-start innings but Kane batted through for the hundred and that was the game changer.

“We did everything we could, we threw ourselves around. The energy was unbelievable. Sure, there were some times that we dropped intensity. But Kane took it away from us.”

The result left South Africa, who have won only one match, virtually out of the running for a semi-final spot while New Zealand kept their unbeaten run intact to move to the top of the standings with four wins in five games.

South Africa’s hopes of making the semi-finals would effectively be over if they lose to New Zealand at Edgbaston on Wednesday.

A nine-wicket victory over Afghanistan on Saturday was their first win in this World Cup in England and Wales.

The Proteas cannot afford any more slip-ups in their remaining games against New Zealand, Pakistan, Sri Lanka and Australia if they are to maintain slender hopes of a semi-final berth.

“Obviously it’s a big game for us but, in saying that, our next three or four games that we have, they are all going to be big games for us for the rest of the tournament,” he said.

“We have to win all the games, not just focus on tomorrow. But in saying that, we know how good New Zealand are playing at the moment. They are a big team in World Cups. They always seem to step up.”

Unbeaten New Zealand are favourites to push South Africa towards the World Cup exit door and De Kock admits morale among Faf Du Plessis’s squad has not been as high as he would like.

The match at the Cardiff Wales Stadium offered the Proteas a last chance to salvage their chances at the tournament that they have never won.

Leg-spinner Imran Tahir took 4-29, engineering an Afghani collapse after a 75-minute rain break as they were dismissed for 125. Chris Morris contributed with figures of 3-13 and Andile Phehlukwayo took two wickets.

The South Africans set about chasing a slightly adjusted target of 127 from 48 overs in cautious fashion, reaching 131-1 with 19 overs to spare.

After their poor start to the tournament, South Africa effectively need to win their remaining four matches, starting with New Zealand in Birmingham on Wednesday, to make the last four.

Raain gifted South Africa their first point at the World Cup as the game against West Indies was washed out, and both teams awarded a point.

The Proteas have struggled to impress in the four matches they have so far played, losing against England, Bangladesh and India.

South Africa slumped to a third straight loss at the Cricket World Cup, falling to India by six wickets on Wednesday.

Wily Indian wrist-spinner Yuzvendra Chahal took four wickets as one of the pre-tournament favourites got their Cricket World Cup campaign off to a confident start by restricting South Africa to 227 for nine at a vibrant Rose Bowl.

Chasing South Africa’s 227-9, India lost opener Shikhar Dhawan for eight and then batting mainstay Kohli for 18 with the score on 54-2 at the Rose bowl in Southampton.

Opener Rohit, however, ensured the victory ended up being a comfortable one with an unbeaten 122 as India reached their target with six wickets in hand and 15 balls to spare.

The innings mirrored South Africa’s World Cup campaign to date as their batsmen struggled to find form or fluency on wickets that were good for striking. They have lost their opening two matches to England and Bangladesh, while India were playing their first game.

Bangladesh piled up their highest one-day International total, underlining their reputation as dangerous outsiders at the tournament.

Mushfiqur and Shakib added 142 runs for the third wicket to notch up Bangladesh’s highest World Cup partnership in an aggressive batting display backed by enthusiastic support.

That meant South Africa needed to pull off the highest run chase in World Cup history, but they ended on 309 for eight and with their next game against India on Wednesday, their chances of making the semi-finals are already under threat.

The country’s former all-rounder Jacques Kallis said the Proteas cannot afford any more mistakes at the World Cup and will need to win almost all their remaining seven games if they hope to qualify for the semi-finals.

“I think you’ll need six wins, maybe five with a really good run rate, to finish in the top four,” Kallis said in a column for the International Cricket Council.

“So South Africa almost need to win every game they will play. There will be no margin for error.

The top four teams from the new round-robin format qualify for the semi-finals and defeat against India on Wednesday could also potentially affect South Africa’s net run rate, which will decide the final standings if teams are tied on points and wins.

Africa’s sole representatives at the 2019 Cricket World Cup, South Africa got off to a losing start against hosts England in the first game of the six-week tournament.

Ben Stokes top-scored with 89 as the hosts made a competitive total of 311 for eight after being sent into bat.

Jofra Archer took two early wickets and South Africa never looked likely to reach their target, bowled out in the 40th over for 207 to give World Cup favourites England the perfect start.

The Duke of Sussex addressed the crowd at The Oval, saying: “Cities will come alive across the next six weeks as World Cup fever sweeps the nation once more…I am now honoured to declare the men’s World Cup of 2019 open.”

South Africa, who have never won the 50-over tournament arrived for the latest edition with high hopes. The Proteas have lost in the semi-finals four times, and are ranked third, behind India.

“We were outplayed in all three departments. Jofra Archer took two wickets up front and Hashim Amla (injured) as well, so it was basically three down,” South Africa’s Du Plessis said.

“I thought 300 was par but there were some really good batting performances from England.”