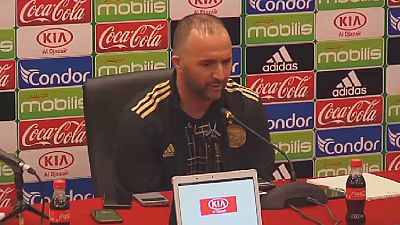 Algeria football team coach Djamel Belmadi has released a list of 23 players for this year’s African Cup of Nations with only one local player, Hicham Boudaoui, who plays for Algiers’ Paradou club. The green coach has not failed to show his ambition to win the AFCON, which will be held from 21 June to 19 July in Egypt.

“No one has the right to prevent us from dreaming in life in general, and I don’t forbid myself either. We have to be more ambitious because it’s free, there’s no pressure, I have top players to go to AFCON. We’re going to turn it into positive pressure. I have the ambition and we all have the ambition to win this African Cup,” said Djamel Belmadi, Algeria coach.

Napoli’s left-back Faouzi Ghoulam and Algeria’s top scorer Naidji were not on the list.

Algeria football team coach Djamel Belmadi has released a list of 23 players for this year's African Cup of Nations.

Algeria begins training on June 3 at the Technical Centre in Sidi Moussa in the capital before flying to Qatar five days later.

Belmadi’s team will travel to Egypt on 18 June for the African Cup of Nations, where they will face Kenya, Tanzania and Senegal in Group C.