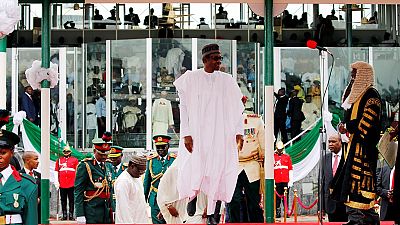 Nigeria’s president Muhammadu Buhari surprised many when he did not deliver a speech at his inauguration on Wednesday.

The 76-year-old former military leader faces a long list of challenges, including combating a sluggish economy, high unemployment and a decade-old Islamic insurgency.

Buhari will need to create jobs if he is to turn around the country’s fortunes over the next four years. Nearly a quarter of the workforce is unemployed and most of its 190 million people live on less than $2 a day.

“Our expectation is that Mr President will now focus more on the issue of security, employment and agriculture because these are the core areas,” said Basil Ejidike, who chairs the APC in southern Anambra state.

Some social media users were critical of the absence of a speech. Software developer Tosin Olugbenga called it was a “missed opportunity”.

“It is an opportunity for the president to speak to Nigerians and give further assurance of his commitment to a better Nigeria,” he said in a tweet.

No Presidential Inauguration Speech today. First time ever! They have continued to lower the bar…
That’s not Buhari…

A nation in trance

Nigeria’s economy grew by 1.93% last year, its fastest pace since the recession. Growth of 2.1% is forecast by the International Monetary Fund (IMF) for this year, though that would be among the slowest rates in Africa.

Tackling insecurity across much of the country is already a priority. The military is fighting jihadist group Boko Haram and an offshoot linked to Islamic State in the northeast, while contending with communal violence over grazing land in central states.

A separate surge of bandit attacks and other violence in the northwest has forced 20,000 to flee to neighbouring Niger since April, the U.N. refugee agency said on Tuesday.