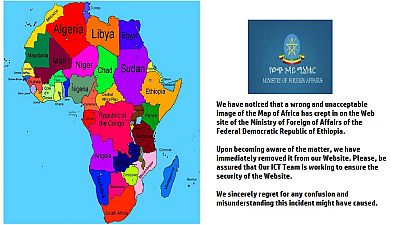 An African map posted on the official website of Ethiopia’s Ministry of Foreign Affairs generated a lot of backlash over the weekend after it was pointed out that it had co-opted Somalia as part of Ethiopian territory.

One of the first persons to note the anomaly was Somali journalist with Voice of America, VOA; Harun Maruf whose post of the photo on Twitter attracted widespread condemnation from Somalis.

It wasn’t long before the said map was pulled down with an official apology which described it as “wrong and unacceptable image” that “crept in on the web site.”

“Upon becoming aware of the matter, we have immediately removed it from our Website. Please, be assured that Our ICT Team is working to ensure the security of the Website.

“We sincerely regret for any confusion and misunderstanding this incident might have caused,” the statement added.

Even though it is the Somali omission that seemed to irk most Twitter users due to a what some people describe as a historic political and diplomatic mistrust, there were more anomalies with the map.

Harun well done for exposing to the sleeping Somali political elite and public of the true intention of Our Neighbours Ethiopia. They harboured irredentist FP toward Somalia since Emperor Sellasie’s reign. They recognised from Barre’s mistakes of Mil annexation wouldn’t work. https://t.co/uxy4hQ0YtZ

No Somalia, no South Sudan, Only one Congo, no Lesotho, no Swaziland?? I hope the Habashi who draw this map was feeling drowsy.

There it is. Fixed it for you. Now let’s move on to more serious issues than imaginary maps. ?? pic.twitter.com/jD84WtMAKL

Swaziland and Lesotho are also missing. This map is offensive and deliberate.

Strange & offensive but not a serious threat yet. it’s better to put this photo aside & focus on dealing with Kenya’s aggression.