From mother to daughter, Tunisian potters pass on ancient tradition

With bucket and spade in hand, Sabiha Ayari from Sejnane in northern Tunisia is among the women keeping alive an ancient tradition of creating pottery with all-natural materials.

Using skills handed down from generation to generation, she extracts red and white clay from local wadis to craft terracota artefacts, such as dolls and animal figurines as well as cooking utensils for the kitchen.

The pottery, mostly cream-coloured with black and red motifs, was added in 2018 to the prestigious “Representative List of the Intangible Cultural Heritage of Humanity” of UNESCO, the United Nations cultural organisation.

The pottery skills of the women of Sejnane have been recognised in 2018 by the UNESCO as an Intangible Cultural Heritage of Humanity. They are known for their practice of using a specific technique to produce terracotta artefacts, sometimes decorated with red and black patterns.

Seated in her lean-to overlooking the family lands, she scoops up the clay and spends most of her time fashioning utensils as well as stylised tortoises and horses.

The women of Sejnane make and decorate their artisan pottery with natural elements from the agricultural region.

The bricks are a rare nod to modern methods, as in the past shattered old pots were used.

After a days-long drying process, the pots are varnished with a thin coat of white clay. Some are then decorated with red-ochre earth.

No sophisticated tools are used, no modern ovens, just the sole of a shoe for the burnishing process and a stick for decorating the pieces with the juice of leaves collected from mastic trees.

The items are then heated on an open hearth fired by dried dung, turning the juice from green to black.

She shows off a large earthenware jar modelled by her grandmother. Other ancient objects have already been shattered to make new items.

Her pottery handicraft, dating back to 3,500 BC, has remained intact “without great technical or aesthetic changes”, explains Naceur Baklouti, a researcher into Tunisia’s heritage.

But changing lifestyles and the availability of low-price kitchen and household items over the past 50 years have led artisans “to switch production from utensils to the decorative”, says Baklouti.

Potters sell their wares from roadside shacks. The best of them are invited to display at exhibitions in Tunis, a two-and-a-half-hour drive away, and in Europe. 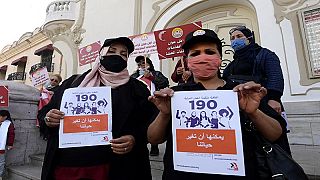 Tunisia's gender violence law struggles to get beyond paper

Tunisia's gender violence law struggles to get beyond paper