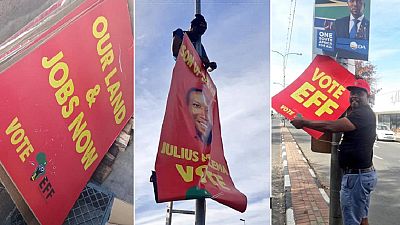 Barely a week after final results from the May 8 polls were declared, South Africa’s Economic Freedom Fighters, EFF, have launched a post poll campaign.

The party – the third biggest – is embarking on the removal of all campaign posters with a two pronged mission – showing leadership and for financial considerations.

“Fellow fighters, we are called upon to engage in an extensive process to remove all our elections posters across the country. Let us remove them and save all the usable material for future purposes. Salute!” EFF posted in a tweet of May 14.

They shared photos of supporters (fighters) in parts of the country already removing the posters.

Posters are a major feature of all elections but removing them after elections have often proven a headache especially for local authorities. It is rare for a party to embark on voluntarily removing their materials.

Elsewhere, local authorities have threatened parties with punitive action to remove their materials.

Gauteng Fighters have done the things.

North West is in, showing leadership.

We are removing EFF posters Fighters.

Fighters of Westcoast Saldanah worked through the night removing our posters.

Western Cape is leading, Hessequa Albertinia has removed election posters and Witzenberg is on the roll.