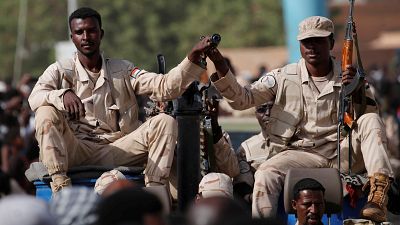 Sudan’s ruling military council warned that it would not allow “chaos” after four people were killed in violence that broke out over an agreement on a political transition reached by the generals and protest groups.

Heavy gunfire was heard in the capital into Monday night but it was not clear who triggered the violence.

One policeman and three protesters were killed in Khartoum and many other demonstrators were wounded, state TV said.

Behind this are groups that...are working hard to abort any progress in negotiations

The Transitional Military Council (TMC), which took over after the army overthrew long-ruling President Omar al-Bashir

last month, blamed the violence on saboteurs who were unhappy with the transition deal.

“Behind this are groups that…are working hard to abort any progress in negotiations.”

TMC said it would not allow citizens’ safety to be jeopardized.

“Neither the (paramilitary) Rapid Support Forces or the army will fire one shot at our protesting brothers, but we repeat: we do not allow chaos,” it said.

incited Monday’s violence. The deaths were the first linked to protests in Khartoum in several weeks.

A hospital in Khartoum said it received more than 60 wounded from Monday’s violence and three dead bodies. A number of people arrived with gunshot wounds in the shoulder, the chest and other body parts, said Amar Abu Bakr, executive director of the Moalem Medical City Hospital.

“There are also a number of wounds resulting from sharp objects, and others from beatings by sticks,” he said.

One wounded patient said a shooter was about 20 meters away when he took aim at him.

“He saw me, and he meant to shoot me,” said Raed Mubarak, a protester. “He did not even shoot at my leg or up in the air. He shot at my chest…he meant to kill me, not to scare or terrorize.”

The military council and the Declaration of Freedom and Change Forces opposition alliance said on Monday they had agreed to a power structure for the transition following Bashir’s removal and arrest.

Both said they had agreed on the duties and authorities of sovereign, executive and legislative bodies.