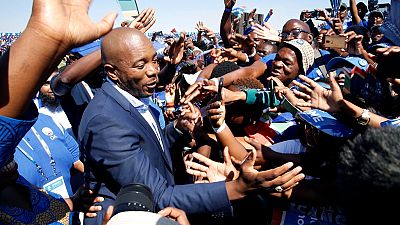 South Africa’s largest opposition party, the Democratic Alliance (DA), although heading for defeat in May 8 national elections, pledged to forge coalitions with smaller parties to break the dominance of the ruling ANC, especially at the local level.

South Africans vote for a sixth time since the end of apartheid in 1994, and while an all-out victory for the ruling African National Congress is almost certain, the margin of its majority is set to drop following a decade of weak economic growth and a rise in racial tensions.

At the DA’s final campaign rally on Saturday, Mmusi Maimane, the first black African to lead the centre-right party, told 5,000 supporters in the township of Soweto the DA would grow jobs, protect minority rights and unite the country.

Your vote should not simply there to expression your race.

“You will find us at the heart of coalition governments in this country, as we build a strong centre for South Africa, free from the divisions of the past,” Maimane said.

Parliamentary and provincial elections take place every five years, with seats allocated according to a proportional representation system.

But the parties have been at odds since, disagreeing over key laws at national and local level, particularly land reform.

The DA rejected a move to amend the constitution to allow land expropriation without compensation after the EFF brought the motion to parliament, and eventually saw it passed with the support of the ANC.

Polls in the past two weeks suggest the DA, as well as the ANC, will struggle to win outright majorities in crucial urban areas.

“The smaller parties pose somewhat of a threat to the dominant ones this year. New parties, many launched by former ANC and DA members, will siphon away votes and could be key in provincial coalitions,” political risk organisation Eurasia said in a note.

The DA won 22 percent of the parliamentary vote in 2014, giving it the second biggest number of seats in the National Assembly.

“Your vote should not simply there to expression your race,” Maimane said.

“If the rights of the minority are going to protected they are going to be protected by the majority,” he said, responding to a growing challenge by smaller nationalist groups to the party’s traditional base of white, English and Afrikaans-speaking middle class voters.