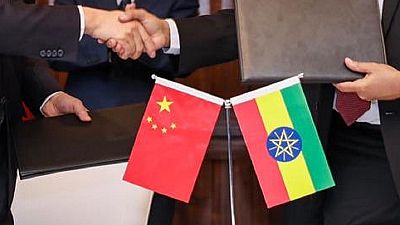 <p>China has cancelled all interest-free loans it had advanced to Ethiopia as at the end of year 2018, the Prime Minister Abiy Ahmed’s office confirmed on Wednesday. </p> <p>Analysts estimate that since 2000 Ethiopia has borrowed over $12bn from China – including funding for the Addis Ababa – Djibouti electric railway line linking the country with Djibouti, its main import / export route.</p> <p>PM Abiy and a high-level delegation arrived in Beijing on Tuesday to attend the second Belt and Road Forum for International Cooperation (<span class="caps">BRF</span>), which starts today (April 25) and ends on April 27.</p> <p>He held meetings with the following persons on his first day of engagement:</p> <ul> <li>Chinese President Xi Jinping in bilateral meeting.</li> <li>Chinese Prime Minister Li Keqiang to discuss the further strengthening of Ethio-China relations, with the signing of five agreements.</li> <li>Leadership of the China Railway Construction Corporation (<span class="caps">CRCC</span>)</li> <li>China Export and Credit Insurance Corporation (Sinosure)</li> <li>State Grid Corporation of China, overseeing the signing of a $1.8 billion investment agreement which covers provision of electric power transmission and distribution lines.</li> </ul> <blockquote class="twitter-tweet" data-conversation="none" data-lang="en"><p lang="en" dir="ltr">This project will supply power for up to 16 industrial parks; the Addis Ababa to Djibouti 2nd railway line and for different cities in the country. This agreement will facilitate not only uninterrupted power supply but also enable the creation of jobs. 2/2<a href="https://twitter.com/hashtag/PMOEthiopia?src=hash&ref_src=twsrc%5Etfw">#PMOEthiopia</a></p>— Office of the Prime Minister – Ethiopia (@PMEthiopia) <a href="https://twitter.com/PMEthiopia/status/1120954725459824640?ref_src=twsrc%5Etfw">April 24, 2019</a></blockquote> <script async src="https://platform.twitter.com/widgets.js" charset="utf-8"></script> <p>This year’s Belt and Road forum will be held under the theme “Belt and Road Cooperation: Shaping a Brighter Shared Future.”</p> <p>The forum events include leaders’ round-table, high-level meeting, thematic forums, <span class="caps">CEO</span> conference and other side events.</p> <p>Representatives from over 100 countries, including 40 leaders of foreign governments have confirmed their attendance. The first Belt and Road forum was held in 2017.</p> <h2 style="font-size:16px;"> January 2019: China forgives Cameroon $78m debt </h2> <p>China in January 2019 forgave Cameroon about $78 million in debt. The move according to Beijing was part of support to help ease economic hardship in the central African country.</p> <p>The announcement was made after a meeting between President Paul Biya and Yang Jiechi, a special representative of the Chinese President Xi Jinping in Yaounde.</p> <p>The said amount was due to be repaid in 2018 as part of the country’s estimated $5.7bn total debt burden. The figure is from the public body managing Cameroon’s external debt.</p> <p>Analysts have, however, expressed reservations about Beijing’s motives with an economist averring that it may be linked to annexing greater access to natural resources.</p>