A month since Ethiopian ET302 crash: 10 events worth noting 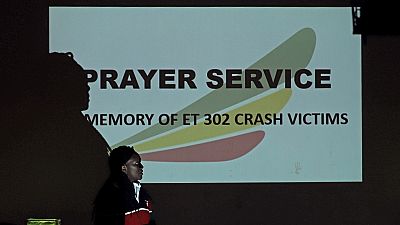 Wednesday April 10, marks exactly a month since the Ethiopian Airlines Boeing 737 Max crashed in the town of Bishoftu in Ethiopia’s Oromia region.

This article looks back at 10 critical moments after the crash as part of our rolling coverage of the incident which was our single most followed incident in March.

All 157 persons aboard the flight ET302 were killed, the government of Ethiopia and the airline confirmed hours after the March 10 crash.

Nationalities from across 35 countries were affected by the incident with Kenya suffering the highest casualty figures – 32 deaths.Canada lost 18 citizens, Ethiopia lost 9, China, Italy and the United States lost eight each.

Ethiopian CEO Tewolde Gebremariam, days after the crash led calls for the Boeing jets to be grounded in the interest of safety as the probe continued.

Airlines across the world announced the grounding of their jets whiles most countries also closed their air spaces to the jets. It wasn’t long before the US government announced a decision to ground all the jets.

The March 10 incident was the second fatal accident in five months after the Lion Air crash in October 2018.

The flight recorders – also known as the Black Boxes were retrieved from the crash site a day after the accident. It turned out that Ethiopia did not have the expertise to download the data hence opted to seek assistance from France.

BEA accepted the task after Germany’s BFU said it had declined a request to handle them because it could not process the new type of recorder used on the 737 MAX jets, in service since 2017.

A burial service was held March 17 for victims of the March 10 crash that claimed 157 passengers in the Ethiopian town of Bishoftu.

Family, friends and other mourners converged for the burial ceremony of the crash victims at the Holy Trinity Cathedral Orthodox church in Addis Ababa.

Incidentally, in the absence of body or even body parts, families and loved ones were given earth to bury as body parts retrieved are analyzed.

5 – PM speaks with Trump over incident

Five days after the crash Ethiopia PM and American president Donald Trump held a phone conversation with the crash as a center piece.

Trump has praised the Ethiopian national carrier in the condolence call with Prime Minister Abiy Ahmed. Abiy’s office said the two had spoken in a phone call which centered on the March 10 crash and on reforms back home.

March 21 – 22, within a space of 24-hours, the airline issued two press statements pointing out what it said were false reports by two American media outlets – the New York Times, NYT; and Washington Post.

First it expressed disappointed at a report carried by the New York Times which suggested pilot of the ET 302 was not properly trained.

Before that was an article by the Washington Post whose content the airline said was made up of baseless and factually incorrect allegations. The manner of western media reportage also came in for flak especially by social media users who defended Ethiopian’s safety track record.

In late March, Ethiopian Airlines received the “African Champion Of The Year” award at the Africa CEO Forum held in the Rwandan capital, Kigali. They described it as: A true Pan- African recognition!

CEO Tewolde on relationship with Boeing said: “Despite the tragedy, Boeing and Ethiopian Airlines will continue to be linked well into the future,” he said. “We pledge to work with Boeing and our colleagues in all the airlines to make air travel even safer.”

“I fully support this. Until we have answers, putting one more life at risk is too much,” Tewolde said of the grounding.

On April 2, Ethiopia’s Minister of Transport and leader of the black box analysis finally released a preliminary report of the crash. Below are main highlights:

a. Aircraft passed airworthiness test before takeoff.
b. Crew properly licensed to operate the flight
c. Takeoff was normal
d. Boeing procedures were used but the crew was unable to control the flight

a. A review of flight control system
b. Review should be adequately vetted before planes allowed back in the skies.

Below are portions of a statement issued by Chairman and CEO of the embattled plane maker, Dennis Muilenberg

“The full details of what happened in the two accidents will be issued by the government authorities in the final reports, but, with the release of the preliminary report of the Ethiopian Airlines Flight 302 accident investigation, it’s apparent that in both flights the Maneuvering Characteristics Augmentation System, known as MCAS, activated in response to erroneous angle of attack information.

“The history of our industry shows most accidents are caused by a chain of events. This again is the case here, and we know we can break one of those chain links in these two accidents.

“As pilots have told us, erroneous activation of the MCAS function can add to what is already a high workload environment. It’s our responsibility to eliminate this risk. We own it and we know how to do it,” he said in part.

In the wake of the accident, Ethiopian authorities reported that all victims had been burnt beyond recognition. Subsequently, grieving families were given earth for burial ceremonies that took place last month.

The Bloomberg news portal is reporting that Ethiopia will send DNA samples from the Boeing 737 MAX 8 crash for identification tests in London.

The accident killed all 157 people on board – 149 passengers and eight crew members. Authorities will transport human tissues gathered by a team led by Interpol and the U.K.’s Blake Emergency Services.