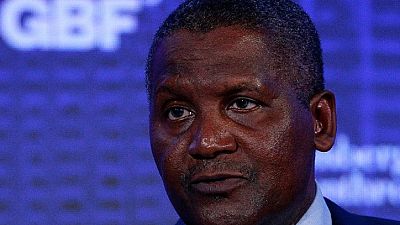 Africa’s richest man Aliko Dangote has disclosed at which point he was convinced that he had money. According to him, it wasn’t after he had withdrawn 10 million dollars cash from a bank that he was sure of his wealth.

Dangote was speaking in the Ivorian capital Abidjan where he was attending the 2019 Mo Ibrahim Foundation’s Governance Week celebrations.

He made the disclosure during a one-on-one session with host and head of the foundation, Sudanese millionaire Mo Ibrahim. Asked about his wealth, Dangote said he had stopped looking at the number of zeros on his bank statement.

Yes, I cashed 10 million dollars, put it in the boot of my vehicle and took it home, I opened it and I looked at it and I said okay fine. Now I believe that I have money.

Then Ibrahim asked how it felt to have made his first million or five million back in the day. Dangote replied: “When you start business, your target is to make your first million, okay, fine, I did that.

He continued: “But you know after (you know) a year or so, I realised that I have much more than 12, 13 billion. And I said okay, fine, all these numbers are just written numbers.

“One day I went to a bank, at that time there were no restrictions (on withdrawals) and I wrote a cheque and cashed 10 million dollars and I took it home for myself.

“Yes, I cashed 10 million dollars, put it in the boot of my vehicle and took it home, I opened it and I looked at it and I said okay fine. Now I believe that I have money.

“It was in the boot of my car, I went there by myself, I drove myself to the bank, I cashed the money, I put it in my room, I looked at the money and I took it back to the bank the next day.”

After talking about 10 million withdrawal, Mo Ibrahim asked Dangote how much money he had in his wallet during the discussion to which he replied. “You’ll be very very surprised, I don’t … not even a dollar, I have nothing, nothing in my pocket.”

The host responded: “That’s money for you guys, when you have money, you don’t carry money.”

I Withdrew $10m Just To Look At It and convince myself that I was rich- Dangote pic.twitter.com/WdvMg9D7cC