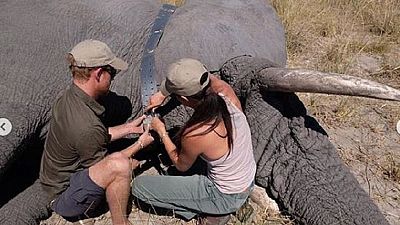 The Sussex royals, Prince Harry and Meghan Markle, undertook a private visit to southern African country Botswana in 2017, they disclosed recently on their new Instagram account.

But it has taken two years to share photos of the trip which was linked to elephant conservation efforts being championed by Harry and his senior brother, Charles.

The couple travelled to the country: “to assist Dr. Mike Chase of Elephant Without Borders in equipping a bull elephant with a satellite collar,” they captioned the Instagram photo. The three-week trip came days after Meghan’s 36th birthday.

Their Instagram account broke a record after grossing hundreds of thousands of followers in the first few hours of its creation. As at the time of filing this report, the SussexRoyal account had 3,800,000 followers.

The Prince maintains a close tie with the continent having focused much of his conservation efforts in Africa. He is president of the African Parks and patron of Botswana’s Rhino Conservation.

The couple disclosed in an interview in late 2017 that Harry had actually proposed marriage to Meghan during a private visit to Botswana. Her engagement ring’s centerpiece is a diamond chosen from Botswana – one of Africa’s biggest producers of the gem.

“I managed to persuade her to come and join me in Botswana. We camped out with each other under the stars. She came and joined me for five days out there, which was absolutely fantastic,” he said.

“So then we were really by ourselves, which was crucial to me to make sure that we had a chance to know each other.”

The Duke of Sussex attends the ‘Our Planet’ premiere at the Natural History Museum with The Prince of Wales and The Duke of Cambridge, lending their joint support for the protection of our environment. As president of africanparksnetwork, The Duke of Sussex continues to advocate for the communities and wildlife that coexist in some of the most vulnerable environments around the world. Be it human wildlife conflict or natural disasters, these communities (park rangers, school children, families) are on the frontline of conservation and we must do more to help them as we also work to safeguard the animals and landscapes that are in critical danger. A few recent photos that look back on: Prince Harry’s long time commitment to this cause as well as a glimpse into the work he and The Duchess of Sussex did in 2017. Their Royal Highnesses travelled to Botswana to assist Dr. Mike Chase of Elephants Without Borders in equipping a bull elephant with a satellite collar. Approximately 100 elephants are poached/killed every day for their ivory tusks. Using satellite technology allows conservationists to track their critical migratory patterns and to protect them and the local communities from human wildlife conflict. The elephant pictured was sedated for just 10 minutes before he was up and back with his herd. Tracking his movements has allowed conservationists to better protect him and other elephants and ensure heightened protection for these beautiful creatures moving forward. Credit: Image 1 PA