Ethiopian Airlines hailed as 'African Champion of the Year' 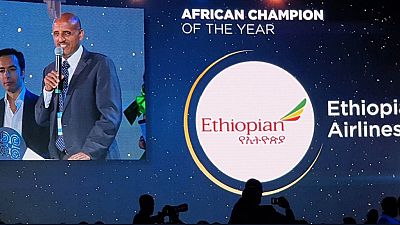 Ethiopian Airlines has been named the ‘African Champion of the Year’ at a prestigious business event in Rwanda.

The airline was hailed for implementing an impressive expansion strategy that has enabled it to reach at least 40 countries on the continent.

The airline’s CEO, Tewolde Gebremariam who received the award at the 7th edition of the Africa CEO Forum, used the occasion to thank Africans all over the continent who have demonstrated their solidarity with the company, following the tragic March 10 plane crash.

“I would like to start by thanking everyone who has supported us after the tragic accident that happened to us two weeks ago. We promise to keep up the good work for the good of the African continent,” Gebremariam said in his acceptance speech.

The airline currently flies to over 50 African cities in what is the largest network by a national carrier. It is also in talks to help about a dozen African countries to establish and manage their carriers.

Ethiopian – a member of the Star Alliance group in its seventh decade of operation has become one of the continent’s leading carriers in terms of efficiency and operational success.

It is the first African operator to take delivery of the Boeing 787-9 dreamliner. Its operations have transformed the Bole International Airport in Addis Ababa into a continental hub.

Other winners at Africa CEO Forum

Morocco’s Mohamed el Kettani emerged the 2019 African CEO of the year, applauded for having invested more than $1 billion on the continent over the past seven year. He is a champion of south- south cooperation and is behind the pan-African development of Morocco’s leading bank, Attijariwafa Bank.

In their 7th year in a row, the 2019 Africa CEO Awards took place in Kigali, Rwanda, recognising outstanding performance of business leaders, companies and investors in Africa.