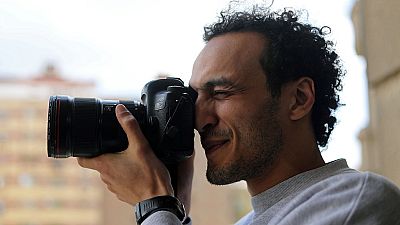 Egypt on Monday released the award-winning photojournalist Mahmoud Abu Zeid, who spent nearly six years in prison following his arrest while covering a bloody crackdown on protests, his lawyer said.

“He was released at 6:00 am (0400 GMT) from the Al-Haram police station (near the Giza pyramids) and is currently at home,” his attorney Taher Aboul Nasr told AFP.

Shawkan was detained in August 2013 while covering clashes between security forces and supporters of ousted Islamist president Mohamed Morsi that turned into a bloodbath in which hundreds of demonstrators died.

The photojournalist was jailed and put on trial along with 739 defendants, most of them charged with killing police and vandalising property.

It was one of the largest mass trials since the 2011 uprising that toppled veteran president Hosni Mubarak.

In September an Egyptian court upheld death sentences against 75 defendants and gave Shawkan a five-year jail term, which covered the time he had already served, but he remained in jail awaiting his release.

Shawkan was accused of “murder and membership of a terrorist organisation” — charges that can carry the death penalty, sparking condemnation from international rights groups which demanded his release.

Shawkan, whose case had been highlighted by the U.N. cultural agency UNESCO and human rights groups, was released because he had already served out his term before being sentenced.

But he must still spend his nights for the next five years at a police station, a penalty he said he would challenge.

“All journalists are at risk of being arrested or killed while doing their work. I am not the first and I will not be the last,’‘ Shawkan said, vowing to continue with his work.

Amnesty International said in a statement on Monday that Shawkan “should never have been forced to spend a single minute behind bars – let alone five and a half years”.

It described the requirement that he spend all his nights for the next five years as a “ludicrous” restriction of his liberty and said it should be lifted immediately.

Another 214 people who were sentenced in September to five years in prison were released from prison on Monday.

President Abdel Fattah al-Sisi, a former army chief, was elected in 2014 nearly a year after leading the military’s overthrow of Morsi following mass protests against the Islamist’s year-long rule.

Sisi, who critics say has carried out a widespread crackdown on dissent, was re-elected in March 2018 after securing more than 97 percent of the vote in the absence of any serious competition.

Reporters Without Borders (RSF) ranks Egypt 161st out of 180 countries on its press freedom index.