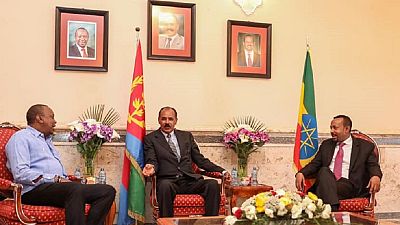 The wind of cooperation and togetherness continues to blow in the Horn of Africa region with Asmara – the Eritrean capital – playing host to the latest tripartite summit of leaders of government.

Ethiopian Prime Minister Abiy Ahmed and Kenya’s Uhuru Kenyatta arrived in Asmara on Sunday for the summit, they were met by Eritrean president Isaias Afwerki.

The two – Abiy and Uhuru – were in Asmara for tripartite talks even though on the side, bilateral talks between Eritrea and the respective guests were also held, information minister Yemane Meskel said on Twitter.

The summit saw high-level officials of the respective countries sitting through the session as deliberations were held. There has been no official statement yet as to the details of the trilateral or bilateral talks.

The most notable such talks in recent times has been the summits between Ethiopia, Eritrea and Somalia. The first of which was held in Asmara last year before a follow up meeting was held in Ethiopia’s Bahir Dar.

Uhuru, who had on Friday and Saturday been in Ethiopia for an official visit, flew out later on Sunday afternoon whiles Abiy and his delegation were taken on a tour of two dams and other agricultural projects in Eritrea.

President Uhuru Kenyatta flew back home this afternoon following the Tripartite Summit on regional developments. Afterwards, PM Abiy Ahmed & his delegation were accompanied by President Isaias for a tour of Gherghera & Msilam dams and related agricultural projects in the area . pic.twitter.com/IFu3LyILUM