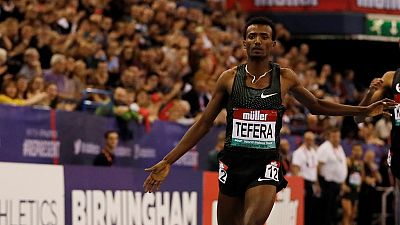 It came on the same Birmingham track where Tefera had won the world title last year. Tefera kicked past Kejelcha after the bell for the final lap and charged to the finish line. Kejelcha finished second in a personal best of 3:31.58.

Kejelcha, the 21-year-old two-time world indoor 3,000m champion, had come within 0.01 of the world indoor mile record last week in New York. He had announced before Saturday’s race he would be going for the 1,500m record.

Scotland’s Laura Muir became the third-fastest indoor miler of all-time at the same meeting when she broke the British record. The European champion clocked 4:18.75.