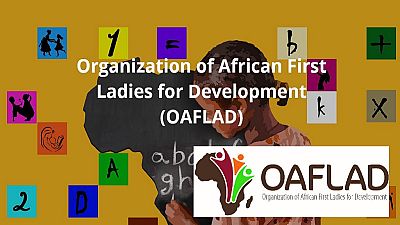 The umbrella body of African First Ladies have announced a change in their name and mission during their 22nd General Assembly held in the Ethiopian capital Addis Ababa.

The Assembly which was held on the sidelines of the just ended 32nd African Union summit disclosed that the new name of the body was Organization of African First Ladies for Development, OAFLAD.

Before the February 11 re-branding, the body was known as the Organisation of African First Ladies against HIV/AIDS, OAFLA.

A new logo was also unveiled along with the new name. The change of name and phase is to help broaden the scope of their activities beyond HIV/AIDS.

It is currently led by First Lady of Burkina Faso, Adjoavi Sika Kabore with her Kenyan counterpart Margaret Kenyatta as vice-president.

They always meet on the sidelines of the AU summits and also whenever their husbands usually congregate for business. Last year for instance they met in Beijing during the FOCAC summit and also in New York during the General Assembly of the United Nations in September.

I co-chaired the official opening of the 22nd Ordinary General Assembly of the African First Ladies Against HIV/AIDS (OAFLA) today in Addis Ababa, Ethiopia. During the meeting, I invited fellow African First Ladies to join me in the forthcoming Beyond Zero Marathon in Nairobi. pic.twitter.com/hHqE4uk8ew

In 2002, First Ladies of Africa came together to form the Organization of African First Ladies against HIV/AIDS (OAFLA), with the objective to be a united voice for Africa’s most susceptible citizens; women and children living with and affected by HIV and AIDS.

Along the years, OAFLA has evolved to become an institution that is able to offer a continent-wide leadership in terms of advocacy in the areas of HIV and a broad range of maternal and child health intervention.

OAFLA currently named as the Organization of African First Ladies for Development (OAFLAD) is an advocacy organization where First Ladies of Africa seek to leverage their unique position to advocate for policies that make health services accessible and laws that boost women and youth empowerment.

First Ladies of Africa reinforce favorable policies and programs through advocacy, resource mobilization and development of partnerships with all stakeholders at all levels.