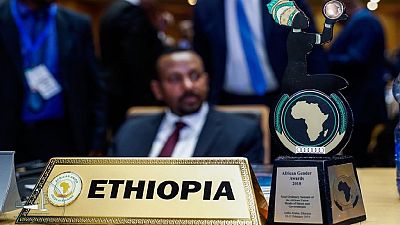 The Office of the Prime Minister showed the plaque sitting on the table of the Premier during the closing ceremony of the 32nd AU Heads of State summit that ended in Addis Ababa on Monday.

The award is traditionally given by the AU in conjunction with the United Nations Economic Commission for Africa, UNECA.

It was Abiy’s first ordinary summit having hosted African leaders last year during an extraordinary summit convened to discuss reforms within the body.

The award comes as no surprise given Abiy’s gender related appointments over the course of 2018. From Ethiopia’s first woman president in Sahle-Work Zewde, to a gender-par cabinet (10 men, 10 women).

Appointing the first woman Chief Justice and appointing a former judge to head the elections body ahead of crucial elections slated for 2020.

Abiy has been widely celebrated by gender groups for trusting women with roles hitherto reserved for men. He defended his female appointments saying there were less likely to be corrupted and also efficient.