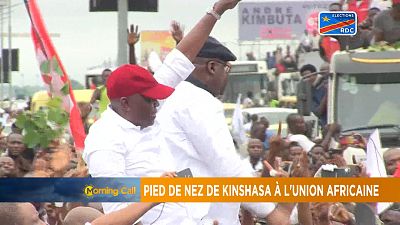 The Democratic Republic of Congo (DRC) is on brink of its first democratic transfer of power since independence in 1960. But this time in dispute over who won December’s presidential election.

To the latest there- First, the inauguration of announced winner of the elections Felix Tshisekedi initially scheduled to take place on Tuesday January 22nd, has been postponed.

Government spokesman Lambert Mende did not give reasons for the delay, but said it will likely take place on Thursday.

The African Union (AU), which had noted “serious doubts” has also postponed its urgent mission to Kinshasa, initially planned for Monday.

On Monday as well in Kinshasa, police dispersed a gathering of supporters waiting to hear a speech by presidential runner-up Martin Fayulu.