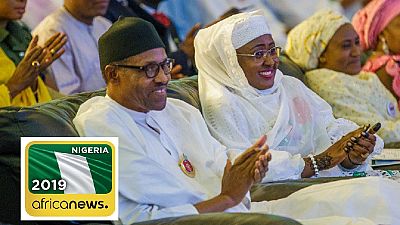 The ruling All Progressives Congress, APC, in Nigeria has outdoored a women and youth campaign team aimed at canvassing for votes for Muhammadu Buhari’s re-election.

The team was officially inaugurated at the presidency at an event attended by Buhari and his wife Aisha. Mrs Buhari is co-chair of the team along with wife of the veep Mrs Oludolapo Osinbajo.

The launch comes barely a week after the Buhari re-election campaign was flagged off in the southern Akwa Ibom State to much fanfare.

The Buharis have in the past had public spats about governance style. Mrs Buhari threatened in a BBC Hausa interview to hold back from campaigning for the president.

In response, Buhari stressed that he was the politician and that his wife belonged to his house, an insinuation that earned him a lot of flak from womens rights activists. Reports have suggested that Mrs Buhari played a strong role in winning votes for her husband back in 2015.

Atiku, a former APC member and staunch ally of Buhari, quit the party and rejoined the PDP under which he served as vice president for eight years. His then boss, Olusegun Obasanjo, has kicked against Buhari’s re-election leading many to say he will back Atiku.

The elections are slated for mid-February 2019. Buhari will secure a final four-year term which will run till 2023 or Atiku will finally get a shot at the presidency after several tries.