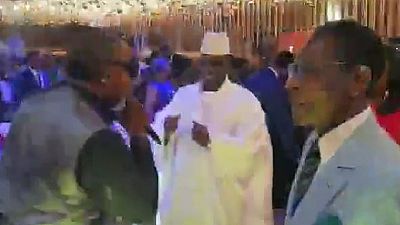 Exiled Gambian president Yahya Jammeh popped up in the Equatorial Guinean capital, Malabo. He was captured in a party mood along with his host, Theodore Obiang Nguema-Mbasogo.

The duo were dancing at a End of Year bash – Presidential Ball by the Equatorial Guinea government – at which famed Congolese musician Koffi Olomide and his band were playing.

The video that showed them dancing along with other top officials was posted on Olomide’s instagram page with the caption: “Les Présidents sur la piste,” which translates to “Presidents on the track.”

The video shows Obiang Nguema jogging his way from his seat to the stage where he joins Olomide in dancing, then comes a smiling Jammeh who joins in the boogie.

Several other top officials and guests joined in dancing and cheering them on. Jammeh is spotted in his usual elaborate all white attire – minus his traditional staff and Islamic beads.

The last public images of Jammeh was in March 2017 when he was spotted on a farm in the president’s hometown of Mongomo, “working for the cameras.”

He ruled The Gambia for over two-decades but lost in December 2016 elections. A failed attempt to cancel the results and regional plan to oust him forced him into exile in Equatorial Guinea.

Despite repeated calls for him to be extradited to face charges of corruption and rights abuse back home, Nguema is on record to have said Malabo will vet any such requests if they are officially made.