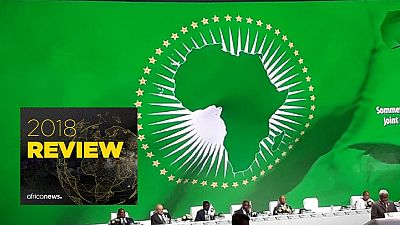 The year 2018 coughed up some big economic and business issues, top of the list being the Africa Continental Free Trade Area, AfCFTA. Economic protests hit about a dozen African countries in 2018.

The AfCFTA and matters arising

Under the AU chairmanship of President Paul Kagame, Kigali in March 2018 hosted the launch of the historic Africa Continental Free Trade Area, AfCFTA, which aims to unite Africa at the level of trade.

For a start, forty-four countries signed up to a historic trade agreement aimed at paving the way for a liberalized market for goods and services across the continent.

The agreement cast in the mold of the European Union’s version was signed during the 10th Ordinary Session of African Union Heads of State summit held in the Rwandan capital, Kigali.

The AfCFTA is supposed to birth the world’s largest free trade area since the World Trade Organization which was formed in 1995. A total of nineteen presidents were present whiles a number of Prime Ministers and government representatives also signed for their respective countries.

As at December ending 2018, the AU reported that it needed seven more ratifications to ensure that the agreement goes into force in early 2019.

Fifteen ratifications, seven to go for the #AfCFTA to enter into force. Merci #Togo! https://t.co/DfsxGBmOTG

South Africa and Nigeria – Africa’s biggest economies – refused to initially sign onto the AfCFTA citing local economic dynamics. South Africa’s President Ramaphosa was in Kigali for the signing of the deal but Pretoria expressed reservations.

Buhari on the other hand is yet to receive a technical committee report on whether or not Nigeria – Africa’s most populous country should sign on to the pact.

Africa and the oil industry

The Republic of Congo continued to experience sluggish economic times under an IMF agreement that the country is into. The most recent visit of the IMF team to the country was in November.

A number of oil producers on the continent were involved in talks by OPEC on their production cuts. It also determined the economic markings that these country adopted. Most affected in this bracket being Nigeria and Angola.

Zimbabwe via its president announced an oil find in a part of the country only to backtrack barely 24 hours later. The Australian oil exploration firm, Invictus Energy, dispelled reports that it had discovered oil and gas deposits in parts of northern Zimbabwe.

Government through the president announced in November that the country had discovered oil and were set to enter a sharing arrangement soon as commercial production started in mid-2020.

But in a statement to the Australian Stock Exchange, Invictus tampered Zimbabwe’s expectations of an oil bonanza saying “an oil or gas discovery has not been made.”

In July 2018, a number of African leaders flew in to join President Omar Guelleh of Djibouti to inaugurate a $3.5 billion free trade zone built by a Chinese company.

Djibouti at the time was in charge of majority of imports into landlocked Ethiopia. Ethiopian Prime Minister Abiy Ahmed had in his fisrt few months in office visited Djibouti, Sudan and Kenya seeking port deals.

The overall dynamics have changed since Ethiopia agreed a peace deal with Eritrea which allows Addis Ababa full access to Eritrean ports.

Except for Tanzania that kept doubling down on entry of fellow Africans, quite a number of countries agreed visa deals with neighbours. Ethiopia was the biggest visa player in Africa. It allowed online applications and started visa on arrival regime for all Africans.

Guinea was one of other African countries that had economic protests. They fed into the wider scheme of citizens decrying the governance style of President Alpha Conde.

Sudan’s bread protests started earlier this year. It saw people march against a hike of 200% in the price of bread. Khartoum backed down and the protests quelled.

An attempt in December to push the measure through has resurrected the protests, this time over increase in bread and fuel prices. The country currently under an IMF program has suffered low times economically.

The economic protests has since morphed into a call for the end to the presidency of Omar Al-Bashir, one of the continent’s longest serving leaders.

Over in north Africa, economic protests hit Tunisia and Morocco. In the case of Morocco, the King called for the government to do all it takes to better social services to the citizens and to combat the issue of inequality and youth unemployment.

Zimbabwe is another country that suffered economic hardtimes. From the currency regime through to the mass shortage of basic supplies in stalls. Economic protests were heightened especially with opposition involvement at a time when the country had just come out of a heated election.

A quick run through the top monthly business news