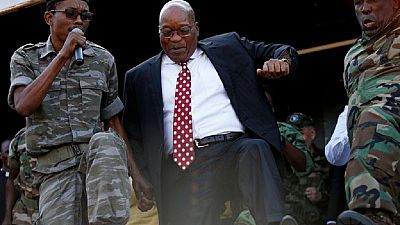 On Sunday morning, Zuma who joined Twitter last Friday had pointed out a fake account in the name of his son, Dudzane, after the said account welcomed him.

“Thank you very much for welcoming me but who are you because my son is not on twitter,” he replied to user, @Duduzane_Zuma. The account which was opened in August 2016 offered an explanation.

No baba I am on Twitter but not consistently, I have to be careful of what I write because it might have an impact on my court case. This is a legit account. https://t.co/8YeRI8HU4D

Zuma also slammed a report in the Sunday Times newspaper that alleged that he had sold some properties he had in Dubai.

The former president sarcastically said he had indeed sold a property before requesting the newspaper to help him with title deed and address of the property because he needed money to settle legal fees.

A High Court last Thursday ruled that Zuma had to pay his own legal fees in cases – civil and criminal – dating as far back as 2005. The state has been ordered to compute and retrieve all payments to that effect.

Zuma had earlier on Friday disowned an account that purported to be raising funds to help him settle the legal fees.

I am still learning about the sphithiphithi of social media pic.twitter.com/3nNgZGTQde

The 76-year-old former president served as head of state between 2009 to 2018. He was replaced earlier this year by his then deputy Cyril Ramaphosa and head of the ruling African National Congress, ANC, and as president.

Zuma had suffered a raft of legal losses particularly relating to corruption and abuse of office. His relations with the wealthy Gupta family is currently being investigated by a government commission.