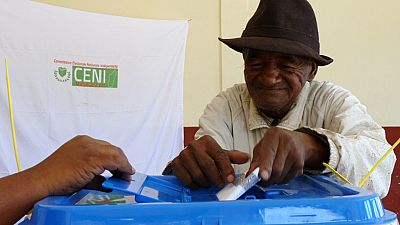 Different African countries continue to routinely conduct elections, in keeping tradition with the values and principles of democracy.

2018 had its fair share of presidential elections, producing a number of new leaders while some incumbents also secured re-election.

In the second part of our election reviews on our 2018 news review, we shine the light Liberia, Egypt and Madagascar where presidential elections were held.

Liberia’s presidential election was a spillover from last year, following the October 10, 2017 polls where ex-football star George Weah emerged winner with 38.4% of the vote against his closest rival vice president Joseph Boakai’s 28.8%.

Weah’s win was not enough to secure an outright victory and a second round was necessary to determine Liberia’s next president.

After unsuccessful petitions to halt the election run-off by the candidate who came third, Charles Brumskine of the Liberty Party and Boakai, the second round was finally held on December 26, 2017.

Brumskine petitioned the Supreme Court calling for a re-run of the entire presidential poll, citing electoral fraud, while Boakai questioned the competence and integrity of the electoral commission.

Weah eventually won the second round, and was declared president-elect on December 28, 2017 having secured 61.5% of the total votes cast.

The 52-year-old ex-PSG star, who is the only African footballer to have been named the best in the world, took over as president of Liberia on January 22, 2018.

He has since embarked on implementing his campaign pledges including cracking down on corruption, liberalising the economy to attract investment and extending free education to all public universities.

Egypt’s Abdel Fattah al-Sisi secured a second term with a resounding victory, garnering 97% of the votes cast at the March 26 polls.

The election, which featured one challenger, Moussa Moustafa Moussa, was dismissed by critics as a sham, after the leading opposition candidates withdrew from the race, citing intimidation from the state.

Voter turnout became a key issue during the election, as Sisi had repeatedly said he sought a strong mandate to empower the government in reviving the economy and delivering the aspirations of the people.

Voters said they were offered incentives including money and food to go out and vote. The opposition had urged Egyptians to boycott the vote.

The Malagasy people cast their votes in the presidential election on November 7, choosing their next leader from a pool of 36 candidates that included president Hery Rajaonarimampianina, and ex-presidents Marc Ravalomanana and Andry Rajoelina.

The three were expected to be frontrunners, having outspent and ‘outcampaigned’ all the other candidates, but when the votes were finally tallied, it turned out to be a two-horse race.

On November 28, Madagascar’s High Constitutional Court confirmed that former presidents Marc Ravalomanana and Andry Rajoelina, would contest a second round of the presidential election, after none of the candidates secured the required 50 percent of votes cast to win outrightly.

The court sealed the fate of the incumbent president who came third, securing 8.82 percent, and would therefore not participate in the run-off, scheduled for December 19. Ravalomanana got 35.35 percent of the vote, while Rajoelina got 39.23 percent.

All three candidates had filed complaints against the electoral process, citing fraud and malpractices, but these were dismissed by the High Constitutional Court.

Rajoelina and Ravalomanana have since embarked on campaigns for the second round, calling for a higher voter turnout.