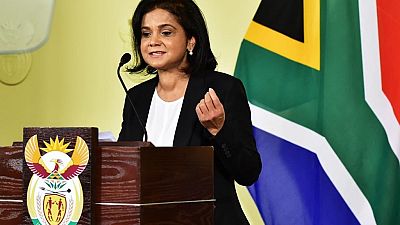 The appointment follows the August ruling by the Constitutional Court that the appointment of the previous prosecutor was invalid.

The highest court in the country ruled that Ramaphosa’s predecessor, Jacob Zuma, had abused his powers by removing chief prosecutor Mxolisi Nxasana and appointing Shaun Abrahams as his replacement in 2015.

If we can ensure that the NPA has credibility and trust as far as the public is concerned, then I think we’ve come a long way.

Ramaphosa, who replaced former president Jacob Zuma in February, has made the fight against corruption a key plank of his administration as he seeks to restore investor confidence after nearly a decade of scandals during the Zuma era.

Batohi is a former state prosecutor from KwaZulu-Natal, and has for the last nine years, worked as a legal adviser to the prosecutor in the International Criminal Court in The Hague.

Batohi pledged to restore credibility and public trust in the office of the National Prosecuting Authority (NPA).

“If we can ensure that the NPA has credibility and trust as far as the public is concerned, then I think we’ve come a long way,’‘ Batohi said during her job interview.

Ramaphosa said in a speech the NDPP should not be beholden to political or business interests and that Batohi had “the experience, conscientiousness and integrity” to succeed.

Batohi will start her new role in February 2019.

The African National Congress welcomes the appointment of Advocate Shamila Batohi as the National Director of Public Prosecutions. pic.twitter.com/4rIvWMwG5v

President #Ramaphosa: I wish Adv Batohi and the entire leadership and staff of the National Prosecuting Authority well in the work that lies ahead.#NDPP pic.twitter.com/spbgobVq4w

Congrats to Advocate Shamila Batohi as the new #NDPP, get ready to have have ill mannered word thrown at you as you prosecute those who believe are above the law and may you bring them to book and give them a lengthy prison sentence. pic.twitter.com/J1bMsq56zE