Multiple reports are claiming that Cameroon will be stripped off hosting rights for the next African Cup of Nations, AFCON, slated for middle of 2019.

A sports news website based in East Africa, Kawowo Sports, reported that the decision by the Confederation of African Football, CAF, cited significant delays in the delivery of infrastructure.

It added that interested countries have been asked to submit hosting proposals. CAF is currently holding an Executive Committee, ExCo, meeting in the capital of Ghana, Accra.

Media reports say South Africa and Morocco are two nations that could throw their hats into the bid.

Several reports show that Cameroon have been stripped off the rights to host the 2019 Africa Cup of Nations by CAF citing “a significant delay as far as the delivery of infrastructure is concerned”. Countries interested in hosting the tournament to submit bids #KawowoUpdates pic.twitter.com/ZejxAoZN9D

A Ghanaian journalist is tweeting about the situation stating that members of the CAF Executive Committee have said there were issues with the bid but that “a decision will be announced today.”

What CAF president said after meeting Cameroon president in October

The CAF president, Ahmad Ahmad, in October this year met with President Paul Biya stressing that all things being equal the tournament was not going to be taken away from the central African country.

“CAF has no plans to withdraw the hosting right from Cameroon,” Ahmad said after the meeting that was also attended by Cameroon’s football legend Samuel Eto’o.

“But if Cameroon evaluates earmarked projects and think she cannot host the competition now, let us know,” he added.

Biya has repeatedly said the country will be ready to host the continent’s biggest football tournament. Cameroon are the current holders of the AFCON, they won the 2017 edition hosted by Gabon.

About the expanded AFCON

Two CAF officials tell me to “ignore every rumour about Cameroon not hosting 2019 AFCON.”

They acknowledge there are problems but will only say “a decision will be announced today”. 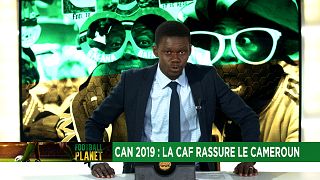