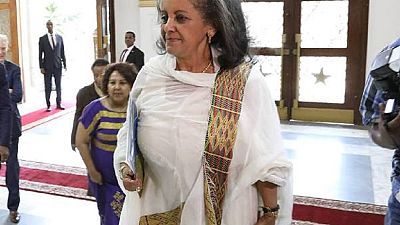 Ethiopia’s new president, Sahle-Work Zewde has joined the ranks of African women that are leading history as pioneers and leaders in male-dominated spheres like politics.

Her appointment on Thursday, comes shortly after Ethiopia’s prime minister, Abiy Ahmed appointed a gender-parity cabinet that included 10 female ministers out of 20.

The African Union chairperson, Moussa Faki Mahamat commended Ethiopia and Rwanda for taking strides to demonstrate that men and women are equal in politics.

The momentum to recognise men and women as equal in politics is vital as we work towards the Africa we want.

‘‘The momentum to recognise men and women as equal in politics is vital as we work towards the Africa we want,’‘ Faki said.

Zewde is currently the only female head of state in Africa, after Liberia’s Ellen Johnson Sirleaf, who was the first democratically elected female president handed over office in January, having served the constitutionally mandated two terms.

In this story, we look at the powerful African women that are trailblazing in leadership positions all over the world.

Ethiopia’s first female president is a trailblazer, having also been the first woman appointed to head United Nations Office to the African Union.

Serving as the United Nations Secretary-General’s Special Representative to the African Union, Zewde is an exceptional diplomat who has served the global organisation and her country for several years.

She has served in ambassadorial roles for Ethiopia to Senegal, Djibouti, France, the United Nations and the Intergovernmental Authority on Development (IGAD).

Zewde will serve in her capacity as president of the federal republic of Ethiopia, for the next six years and while the position is largely ceremonial, she has already indicated that she will pursue an agenda to promote peace and women empowerment.

In a patriarchal society such as ours, the appointment of a female head of state not only sets the standard for the future but also normalises women as decision-makers in public life. #Ethiopia (2) pic.twitter.com/3Z8UNd15E0

Having served as Rwanda’s top diplomat since 2009, Louise Mushikiwabo, who previously worked at the African Development Bank, relinquished her position this month when she was elected secretary-general of the International Organisation of La Francophonie (OIF).

The 57-year old will for the next four years, oversee the activities of the global body that brings together 58 countries and regional governments, representing 274 million speakers of French around the world.

In July this year, social media giant Twitter announced the appointment of Ngozi Okonjo-Iweala to its board of directors.

The former Nigerian finance minister, who also several positions at the World Bank will work to make ‘Twitter a safer, healthier place’ for its over 300 million users.

She is the highest ranking female official in the world’s football governing body, and the first ever woman to achieve the rank of FIFA secretary-general.

Senegalese Fatma Samba Diouf Samoura was appointed to the role in 2016, and has served with distinction, implementing FIFA’s reform agenda and organising the record breaking World Cup tournament in Russia.

The 55-year old, who worked with the United Nations for 21 years, recently said she had encountered racism and sexism when she took over the job at FIFA, as some people resisted the idea of a ‘black woman’ in a senior position.

In 2016, Nigeria’s environment minister at the time, Amina Mohammed was appointed the deputy secretary-general of the United Nations.

“My job description is simple: to build a world where every girl & boy has the tools & support to make their dreams a reality.” #YouthCSW61 pic.twitter.com/wTRRdxtNM6

Still with the United Nations, Cameroonian economist Vera Songwe was appointed the new Executive Secretary of the Economic Commission on Africa (ECA) in April last year.

ECA is one of the United Nation’s five regional commissions, and its mandate is to promote the economic and social development of African states.

Having previously served at the United Nations, African Union and the Ugandan parliament, 59-year-old Byanyima leads the efforts of Oxfam to find effective ways to end the injustice of poverty in 94 countries.

While renewing her mandate in 2017, Oxfam Chair Juan Alberto Fuentes described Byanyima as a ‘visionary leader in the fight against inequality and poverty, and an inspiration to our teams and partners around the world’.

Phumzile Mlambo-Ngcuka is a South African politician and a United Nations Under-Secretary-General currently serving as the Executive Director of UN Women.

Having served as South Africa’s deputy president from 2005 to 2008, Phumzile has constantly campaigned for gender parity in politics, equal pay for women and equality.

In an interview with ours sister channel, Euronews, Phumzile said she believes the appointment of a female secretary-general at the UN would inspire more female heads of states in Africa and globally.