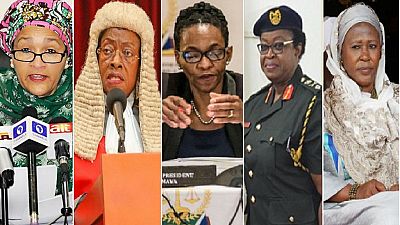 2017 was a good year for African women as a number of them rose up the ladder in their fields be it in politics, diplomacy, the military and the judiciary.

It started off with the swearing in of Amina Mohammed as deputy United Nations Secretary-General in February 2017. Her appointment was announced late 2016 at a time she was Nigeria’s environment minister.

Amina became only the second African woman to be appointed to the role of Deputy Secretary-General of the UN. The first being Tanzania’s Asha-Rose Migiro who served in the role between 2007 – 2012 under Ban Ki-moon.

The Gambia managed with the help of ECOWAS to scale the Yahya Jammeh political hurdle in January 2017. Jammeh is currently living in exile in Equatorial Guinea. President Adama Barrow was subsequently sworn into office.

In April 2017, the country’s new parliament was constituted after local polls which the ruling coalition dominated. The country picked its first female speaker of parliament in the person of Mariama Diack Denton.

“I will do my best to live up to expectation. I will be impartial as expected and maintain the dignity of the office. I look forward to working with all sides of the Assembly and ensure that the welfare of the people is the priority,” she said after taking her oath of office.

Still in April, there was the appointment of Gambia’s first visually impaired female member of parliament. Ndey Yassin Secka-Sallah was appointed by the President as one of five nominees he can nominate to parliament as per the constitution.

After the initial back and forth over her age limit, Gambian president Adama Barrow kept Fatoumata Jallow Tambajang as acting vice and women’s affairs minister until the legal hurdles were addressed.

She formally took office as vive-president in November 2017. She had played a key role in the formation of the coalition that ousted Yahya Jammeh after 22 years.

In May 2017, South Africa’s President Jacob Zuma appointed Justice Mandisa Maya as the President of the Supreme Court of Appeal, the president’s office said, making her the first woman to occupy the position.

“Her appointment to the position elevates her to the third highest position in the Judicial Branch, after the Chief Justice and Deputy Chief Justice of the Republic,” Zuma said at the time. The court is the second highest judicial body in South Africa.

Ghana said goodbye to a female trailblazer in its judicial history as Georgina Theodora Wood retired as Chief Justice after a decade in charge. President Nana Addo Dankwa Akufo-Addo went on to pick another woman to hold the fourth most important office in the country.

Justice Sophia Akuffo was in June this year sworn into office. She is the second female CJ in Ghana’s history but the fifth under its current 1992 consitution. She can serve as president in the absence of the president, his vice and the speaker of parliament.

Still in Ghana, the west African country got its first female Brigadier-General in the person of Constance Ama Emefa Edjeani-Afenu.

Her appointment to the post was ratified in March 2017 when the Chief of Defence Staff (CDS) Major – General Obed Boamah Akwa, conferred the rank on her during a ceremony in the capital Accra.

After serving in different capacities since joining the Ghana Armed Forces in 1978, she served as Ghana’s deputy military advisor to its permanent mission in New York since 2013. With her new position, she returns to take up post at the Ministry of Defence in Accra.

In December 2017, Nigeria also celebrated Captain Jamila Malafa for becoming the first woman from the country’s north to rise to the rank of a Commodore.

The post of a Commodore is equivalent to that of a Brigadier General in the army. A commodore is a commissioned naval officer who ranks above a captain and below a rear admiral; the lowest grade of admiral.

The 55-year-old who hails form the northeastern Adamawa State was decorated at an event in the capital Abuja.

Cameroon’s Vera Songwe beats off competition to get ECA post

Dr. Songwe beat more than 70 candidates to clinch the post which was held by Dr. Carlos Lopes who stepped down from the organisation in September 2016.

ECA is one of the United Nation’s five regional commissions, and its mandate is to promote the economic and social development of African states.

History is made as Egypt gets its first female governor

Egypt has a total of twenty-seven governorates. Governorates are the top tier of the country’s jurisdiction hierarchy. A governorate is administered by a governor, who is appointed by the President of Egypt and serves at the president’s discretion.

But it was not until February 2017 that Egypt got its first female governor in Nadia Ahmed Abdou Saleh. The most populous north African country had never before elected a woman to serve as governor. The furthest women got politically was the deputy governor post.

The story of Yetnebersh Nigussie is one that cobines ability with determination. Despite being visually impaired, she strived to get an education and set out to help people with similar challenges.

Niguisse was among the first three visually impaired persons to study law at Ethiopia’s Addis Ababa university. She recalls having to transcribe audio recording of her lectures into Braille throughout her 5-year study.

“I really want to see a world where nobody is discriminated because of his or her disability or any other status,” she told the Thompson Reuters Foundation. She was not born blind but has not allowed it to limit her in life.