Ten quick facts about the 2018 presidential elections in Cameroon. 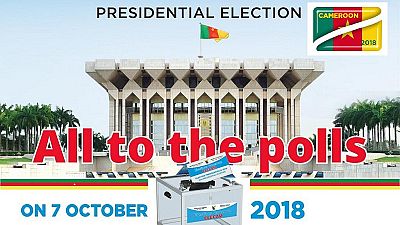 Cameroonians are preparing to cast their ballot on October 7, to decide who will steer the affairs of the Central African nation for the next 7 years.

For the past 2 years the country has been facing unrest due to the ongoing crisis in the English Speaking regions. However, it is generally opined that the outcome of this election is very critical to the stability of the country as any irregularities may plunge the country into a civil war.

As part of the coverage of the elections, Africanews gathered ten top facts about the 2018 elections.

1. 11th Presidential election in the country

This is the 11th Presidential election the country is organizing since it gained independence with the first election held in 1965.

The elections will mark the 7th time President Paul Biya is contesting after he took over power from Ahmadou Ahidjo in 1982. He is seeking another 7 years term after having ruled the country for 35 years.

3. 9 candidates retained for the elections

The elections governing body, ELECAM, retained 9 candidates, out of the 28 files received. This is the smallest number of candidates running for the country’s highest office since 2004. In 2004, there were 16 candidates; while 2011 had 23 candidates.

For the very first time, the Social Democratic Front (SDF), the main opposition party will not be represented by Ni John Fru Ndi, the founder and chair of the party. Joshua Osih was picked as the party’s flagbearer.

Some opposition parties have joined the ruling Cameroon People Democratic Movement party, while a faction of the Union of the Peoples of Cameroon, UPC has opted for a coalition with the Popular Front for Development, PFD led by Akere Muna.

The country will be voting amidst mounting insecurity in the North and South West, and a demand by anglophone separatists to break away from the French part of the country.

No female candidate is part of the 2018 presidential race. Edith Kahbang Walla who stood in for the 2011 elections had resolved not to run if President Biya failed to resolve the crisis in the Anglophone regions.

The application fee charged for each aspirant was raised from 5 million to 30 million FCFA.

10. Constitutional takes over proclaimation of result

The constitutional council will take over the proclamation of results from the Supreme Court in the 2018 elections.