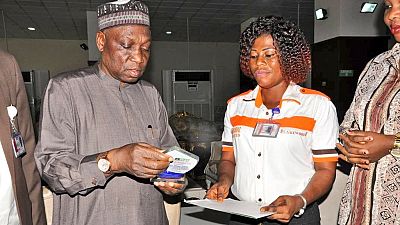 Nigeria’s main airport operator, the Federal Aviation Authority of Nigeria, FAAN, has rewarded a cleaner who earlier this month found some valuables and returned them to the authorities.

FAAN Managing-Director, Engr. Saleh Dunoma, at a short ceremony presented a Commendation Letter and Plaque to Miss Ishai for her honesty.

MD FAAN-Engr. Saleh Dunoma, in the company of the Regional General Manager Abuja and some FAAN Members of staff during the Presentation of Commendation Letter and Plaque to Miss Mary Ishai if Lakewood, who found a bag containing some Valuables and Returned to the owner. pic.twitter.com/kKy7tpk0b0

Her story comes on the back of a similar action by two guards at Nigeria’s Muratala Muhammed International Airport.

The two, junior security guard Achi Daniel and his supervisor Francis Emepueaku, according to the federal airports authority, returned a forgotten bag with large sums of money and expensive items. The two, work at the multi-level car park at the Lagos airport.

“Nigeria will no longer be a byword for corruption and plundering of public resources. That is the path we have chosen to take, and our country will eventually get to a new shore,” he added.

“If the money was in multi-millions of foreign currencies I would still have returned it,” Mr Daniel told Sahara Reporters. “No amount of money would make me to take what doesn’t belong to me,” he retorted to calls that he should or could have kept the money.

According to him, despite attempts by the owners of the bag to reward them with money, they refused the offer insisting that they “were just doing their job.” Reports say both men have been awarded by their security company with education scholarships worth 250,000 Naira ($686).