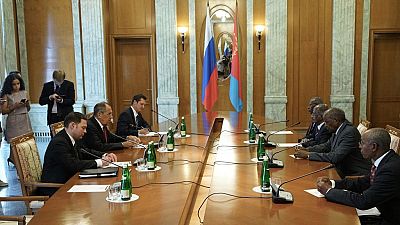 <p>Russia is set to make investments in a port in Eritrea as Moscow enters talks to set up a logistics centre in the Horn of Africa nation.</p> <p><span class="caps">RIA</span> news agency cited Foreign Minister Sergei Lavrov as disclosing the move on Friday during a meeting with his Eritrean counterpart Osman Saleh.</p> <p>“Lavrov said the project would help develop bilateral trade, the agency reported. It did not name the port,” a Reuters report added. Eritrea’s known port are at Massawa and Assab. A recent report by Bloomberg quoted a mines official hinting of a possibility of developing another <a href="http://www.africanews.com/2018/08/24/eritrea-considers-new-port-for-potash-trade-after-ethiopia-peace-deal/" target="_blank">port for potash export. </a></p> <p>In speaking after meetings held in Sochi, Lavrov said: “We undoubtedly would like to thank you (Eritrea) for the close coordination of our approaches at the UN and other international venues.”</p> <p>An Eritrean delegation – comprising Saleh and presidential advisor Yemane Ghebreab – are on an official visit to Russia. They arrived on Thursday and will end their engagements on September 1.</p> <p>Eritrea has been on a renewed diplomatic engagement since President Isaias Afwerki signed a peace deal with Ethiopian Prime Minister Abiy Ahmed in July 2018.</p> <p>Ethiopia and Eritrea in July agreed to jointly develop ports on Eritrea’s Red Sea coast, Ethiopia’s state broadcaster said a day after the leaders met and agreed to normalize relations after a 20-year military standoff.</p> <h2 style="font-size:16px;"><a href="http://www.africanews.com/tag/eritrea/" target="_blank"> <span class="caps">CLICK</span> <span class="caps">HERE</span> for more news items on Eritrea </a></h2> <p><img src="https://static.euronews.com/articles/53/02/530249/1024x576_bonus-massawa.jpg" alt="" /></p> <iframe src="https://www.facebook.com/plugins/post.php?href=https%3A%2F%2Fwww.facebook.com%2Fafricanews.channel%2Fposts%2F1993751030688734&width=500" width="500" height="506" style="border:none;overflow:hidden" scrolling="no" frameborder="0" allowTransparency="true" allow="encrypted-media"></iframe> <a href="https://twitter.com/AlfaAfrican" class="twitter-follow-button" data-show-count="false">@alfaafrican</a><script async src="//platform.twitter.com/widgets.js" charset="utf-8"></script>