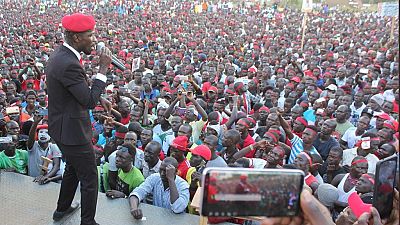 As local and international pressure piles on the Uganda government to release popular musician and legislator, Robert Kyagulanyi commonly known as Bobi Wine, the military on Wednesday released videos showing him in detention.

The video which sought to confirm that Bobi Wine is not in a life threatening condition, as reported by his lawyers and family, has been received with mixed reactions by Ugandans.

In the 8-second clip circulated widely on social media, Bobi Wine is seen in a red shirt and pair of shorts with slippers siting around a plastic table laughing but with apparent difficulty.

Bobi Wine has been in detention for 10 days following his arrest in the West Nile town of Arua where he was campaigning for an opposition candidate in a parliamentary race.

The video emerged after he was visited at Makindye Military Barracks by the deputy speaker of parliament, Jacob Oulanyah.

“I talked with Hon Kyagulanyi but he is in a lot of pain. He is however in a uniquely humorous mood and we were laughing with him,” Oulanyah is quoted as saying.

Meanwhile, the #FreeBobiWine petition that has been used by several of Bobi Wine’s supporters and well-wishers has continued to gain steam.

Bobi Wine is due to appear before a court martial on Thursday, wher he is facing charges of illegal possession of weapons.

His lawyer and family members have alleged that he was beaten and tortured while in the custody of security forces.

“We call upon the Ugandan government to ensure his full access to medical treatment, to allow a full and impartial investigation of his violent arrest and imprisonment,” the letter read.

The lawyers are recommending that the US should “hit (government) officials in their wallets with a Magnitsky-style sanctions schedule as they need to understand the consequences of this attack on human rights”.

The US Magnitsky Act allows Congress to impose sanctions on human rights abusers anywhere in the world.

The arrest of the popular MP, a vocal critic of long-serving President Yoweri Museveni, has angered many in Uganda, and protests erupted in the capital on Monday over his ongoing detention.

Also on Wednesday, hundreds gathered at Kampala’s main Catholic cathedral to pray for the 36-year-old singer’s safe release. Outside a crowd chanted his campaign slogan, “People power, our power.”

The treatment of Kyagulanyi is fast becoming a lightning rod for youthful opposition to the long rule of Museveni, 74, who seized power in 1986 at the head of rebel army.

Museveni, on Thursday evening, issued a statement saying he does not have the power to release Bobi Wine. He urged Ugandans to be patient and let the law takes its course.